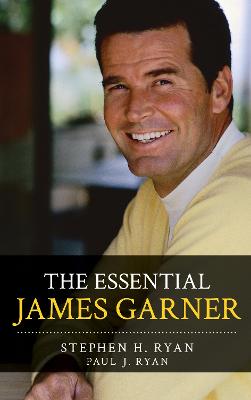 Since his television debut in the mid-1950s, James Garner entertained millions of fans on screens both big and small. From supporting roles in memorable films like Sayonara and The Notebook to leading roles in box office hits including The Great Escape, Victor / Victoria, and the feature film version of Maverick, the actor appeared in some of the most entertaining movies of all time.

In The Essential James Garner, Stephen H. Ryan and Paul J. Ryan consider the prolific output of one of America's most beloved actors. This book looks at the key feature films, made-for-television movies, and television episodes of Garner's career. The authors discuss each of the actor's most well-known films-The Great Escape, The Americanization of Emily, Support Your Local Sheriff! and Murphy's Romance, among others-as well as critically acclaimed television movies including Barbarians at the Gate, Breathing Lessons, Decoration Day, Heartsounds, My Names Is Bill W., and Promise. Each entry provides details about the film's production, critical reception, and commercial success. The best episodes of Garner's two iconic television, Maverick and The Rockford Files-as well as his highly regarded but little seen series Nichols-are also identified.

The authors make clear why these choices are indispensable viewings, not only for those already familiar with Garner, but also for those who have yet to enjoy the work of this Oscar nominee and multiple Emmy winner. A tribute to the career of a Hollywood legend, The Essential James Garner will appeal to anyone wanting to know more about the actor's best films and programs.

» Have you read this book? We'd like to know what you think about it - write a review about Essential James Garner book by Stephen H. Ryan and you'll earn 50c in Boomerang Bucks loyalty dollars (you must be a Boomerang Books Account Holder - it's free to sign up and there are great benefits!)

Stephen H. Ryan has been the senior acquisitions editor of Arts & Literature for Rowman & Littlefield since 2005. He has contributed articles to Clamor magazine and has worked on such books as The Yellow Wallpaper: Women Writers Texts and Contexts (1993), Sundays with Sullivan (2009), and The Encyclopedia of Sports Films (2011). Paul J. Ryan is a business management consultant whose clients include the Broward County School System and Office Depot. He serves on Keiser University's Graduate School Advisory Board.