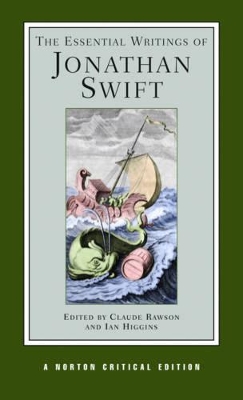 The Essential Writings of Jonathan Swift

» Have you read this book? We'd like to know what you think about it - write a review about Essential Writings of Jonathan Swift book by Jonathan Swift and you'll earn 50c in Boomerang Bucks loyalty dollars (you must be a Boomerang Books Account Holder - it's free to sign up and there are great benefits!)

Claude Rawson is Maynard Mack Professor of English at Yale University. He is the author of God, Gulliver, and Genocide: Barbarism and the European Imagination: 1492-1945, English Satire and the Satire Tradition, and Satire and Sentiment, 1660-1830: Stress Points in the English Augustan Tradition. He is General Editor of the Works of Jonathan Swift (Cambridge University Press) and co-editor, with Ian Higgins, of the Oxford World Classics edition of Gulliver's Travels. Ian Higgins is the author of Swift's Politics: A Study in Disaffection (1994) and Jonathan Swift (2004), and is an editor (with Claude Rawson) of Gulliver's Travels (2005). He is a Reader in English at the Australian National University in Canberra, Australia, where he teaches courses on early modern and eighteenth-century literature and on British imperial fiction.

A Preview for this title is currently not available.
More Books By Jonathan Swift
View All

Selections from the Journal to Stella, a Tale of a Tub, Personal Letters and Gulliver's Travels; Together with the Drapier's Letters, I; Sleeping in Church; A Modest Proposal
$83.10 $92.33

A Proposal for Correcting, Improving and Ascertaining the English Tongue: In a Letter to the Most Honourable Robert, Earl of Oxford and Mortimer, Lord High Treasurer of Great Britain
$65.27 $72.52

A Modest Proposal for Preventing the Children of Poor People from Being a Burden to Their Parents or the Country, and for Making Them Beneficial to the Country
$65.27 $72.52