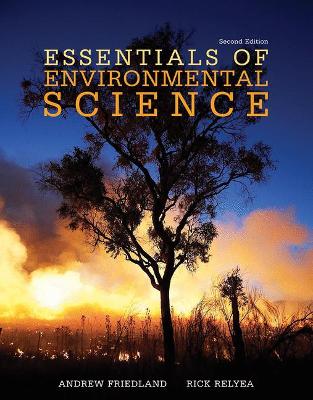 Essentials of Environmental Science is ideal for a one-semester course. It takes the same non-biased approach as its parent text, teaching students to think critically about data presented. In addition to being briefer, Essentials is even more accessible placing less emphasize on math calculations. The coverage of ecology, agriculture, energy, and water has also been streamlined to provide a more focused treatment of the science concepts.

» Have you read this book? We'd like to know what you think about it - write a review about Essentials of Environmental Science book by Andrew Friedland and you'll earn 50c in Boomerang Bucks loyalty dollars (you must be a Boomerang Books Account Holder - it's free to sign up and there are great benefits!)

Andrew J. Friedland is The Richard and Jane Pearl Professor in Environmental Studies and Chair of the Environmental Studies Program at Dartmouth. He was the founding chair of the Advanced Placement Test Development Committee (College Board) for Environmental Science. He has a strong interest in high school science education and in the early years of APES he participated in a number of trainer and teacher workshops at Kimball Union Academy, Dartmouth College, and elsewhere. During many of the last ten summers, he has guest lectured at the St. Johnsbury Academy (Vermont) AP Institute for Secondary Teachers. Friedland regularly teaches introductory environmental science and energy courses and has taught courses in forest biogeochemistry, global change, and soil science, as well as foreign study courses in Kenya. For more than two decades, Friedland has been researching the effects of air pollution (lead, nitrogen, sulfur, calcium) on high-elevation forests of New England and the Northeast. More recently, he has begun investigating the impact of individual choices and personal action on energy consumption and the environment. Friedland has served on panels for the NSF and USDA Forest Service and has just finished serving on his third panel of the Science Advisory Board of the EPA. He has authored or coauthored more than fifty-five peer-reviewed publications and one book, Writing Successful Science Proposals (Yale University Press). Friedland received BAs in Biology and Environmental Studies and a PhD in Geology from the University of Pennsylvania. He is passionate about saving energy and can be seen wandering the halls of the Environmental Studies Program at Dartmouth with a Kill-A-Watt meter, determining the electricity load of vending machines, data projectors, and computers. Rick Relyea is Director of the Jefferson Project at Lake George for Rensselaer Polytechnic Institute, a groundbreaking partnership between Rensselaer, IBM, and the FUND for Lake George. For the project, Relyea leads a team of Rensselaer scientists, engineers, computer scientists, and other experts who are using the latest in science and technology to understand, predict and enable a resilient ecosystem for nearby Lake George. From 1999 to 2014, Relyea was at the University of Pittsburgh. In 2005, he was named the Chancellor s Distinguished Researcher and in 2014 he received the Tina and David Bellet Award for Teaching Excellence. From 2007-2014, Relyea served as the director of the university s field station, the Pymatuning Laboratory of Ecology, where he oversaw a diverse set of ecological field courses and facilitates researchers from around the world.Rick has taught thousands of undergraduate students in introductory ecology, behavioral ecology, and evolution. His research is recognized throughout the world and has been published in Ecology, Ecology Letters, American Naturalist, PNAS, and other leading ecological journals. The research spans a wide range of ecological and evolutionary topics including animal behavior, sexual selection, ecotoxicology, disease ecology, phenotypic plasticity, community ecology, ecosystem ecology, and landscape ecology. Currently Relyea s research focuses on aquatic habitats and the diversity of species that live in these ecosystems. David Courard-Hauri is an Associate Professor of Environmental Science and Policy at Drake University in Des Moines, Iowa. At Drake, Dr. Courard-Hauri teaches courses on Environmental Science, Climate Change Science and Policy, Quantitative Methods in Environmental Decision Making, and Ecological Economics. With a PhD in Chemistry from Stanford University, and a Masters in Public Affairs from Princeton's Woodrow Wilson School, Dr. Courard-Hauri seeks in his research to combine aspects of environmental science, economics, and public policy in his work modeling economic consumption and its environmental impacts. He walks to work, and in his spare time cares for a multitude of fruit trees and berries in his yard."

A Preview for this title is currently not available.
More Books By Andrew Friedland
View All