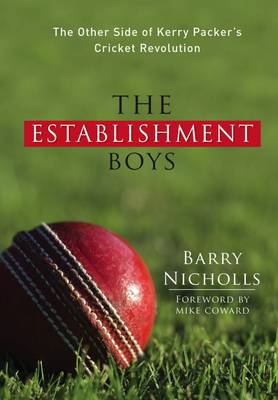 The Other Side of Kerry Packer's Cricket Revolution

Almost 40 years ago, there were two national Australian cricket teams existing in seemingly parallel universes: the glamorous, 'rock-star' players of World Series Cricket run by media mogul Kerry Packer; and the traditional Australian Test team made up of young, poorly paid men who represented their country in the establishment international Test arena. Incredibly, four decades later we know more than ever about the characters and plot-twists of the WSC saga, thanks to a commercial media-driven fascination with magnate Kerry Packer and the household-name cricket heroes of the day. But the story of the players who stuck solid to the Australian Cricket Board is largely forgotten or simply unknown.

» Have you read this book? We'd like to know what you think about it - write a review about Establishment Boys book by Barry Nicholls and you'll earn 50c in Boomerang Bucks loyalty dollars (you must be a Boomerang Books Account Holder - it's free to sign up and there are great benefits!)

Barry Nicholls, an ABC broadcaster in Western Australia, also presents a national sports-book show for ABC Grandstand. A school teacher turned journalist, Barry Nicholls has written five books about sport, most recently the prolific seller 'You Only Get One Innings - family, mates and the wisdom of cricket' as well as 'Cricket Dreaming the Rites of Summer' and 'For Those Who Wait The Barg Jarman Story'.

A Preview for this title is currently not available.
More Books By Barry Nicholls
View All