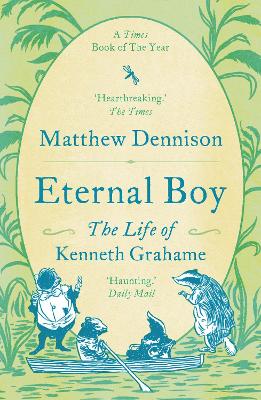 The story of Kenneth Grahame, author of the children's classic Wind in the Willows, and of the vision of English pastoral that inspired it.

A TIMES BOOK OF THE YEAR.

'Matthew Dennison skilfully covers the facts, producing a vivid impression of this strange, shy, awkward figure. The result is a highly readable book'Literary Review.
'A haunting new biography ... A compelling account of Grahame's life'Daily Mail.
'A sensitively probing and nuanced portrait that makes sense of the darker character furled in the dreamer'New Statesman.

During the week Kenneth Grahame sat behind a mahogany desk as Secretary of the Bank of England; at the weekend he retired to the house in the country he shared with his fanciful wife Elspeth and fragile son Alistair and took lengthy walks along the Thames in Berkshire, 'tempted [by] the treasures of hedge and ditch; the rapt surprise of the first lords-and-ladies, the rustle of a field-mouse, the splash of a frog.'

The result of these pastoral wanderings was The Wind in the Willows: an enduring classic of children's literature; a cautionary tale for adult readers; a warning of the fragility of the English countryside; and an expression of fear at threatened social changes that, in the aftermath of the World War I, became reality. Like its remarkable author, it balances maverick tendencies with conservatism. Grahame was an Edwardian pantheist whose work has a timeless appeal, an escapist whose withdrawal from reality took the form of time travel into his own past.

Other Editions - Eternal Boy: The Life of Kenneth Grahame by Matthew Dennison » Have you read this book? We'd like to know what you think about it - write a review about Eternal Boy: The Life of Kenneth Grahame book by Matthew Dennison and you'll earn 50c in Boomerang Bucks loyalty dollars (you must be a Boomerang Books Account Holder - it's free to sign up and there are great benefits!)


A Preview for this title is currently not available.
More Books By Matthew Dennison
View All