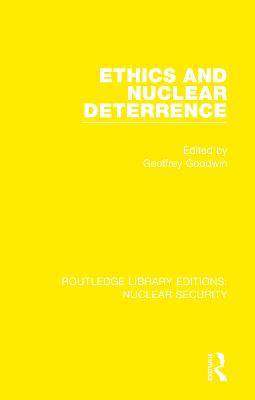 As nuclear weapons become ever more sophisticated, so the deterrence debate becomes increasingly complex. The 'Ban the Bomb' slogans of the 1950s had been replaced by cries for 'nuclear-free zones', and talk of 'megatonnage' and 'fallout' had given way to talk of 'tactical' nuclear weapons and 'limited strike capability'.

Originally published in 1982, this book considers the ethical issues raised by nuclear policies and by the debate between proponents of the multilateralist/unilateralist approaches to disarmament and arms control at the time. It is not, like so many books on the subject, an ideological statement: there are essays by defence strategists which put the case for deterrence and essays by academics and churchmen which strenuously oppose it. The book also includes an essay on attempts to mitigate the appalling brutality of the many 'conventional' wars since 1945.

At a time when the rhetoric and misinformation produced on both sides of the debate continued to obscure many vital issues, this book was welcome, sensible and necessary.

» Have you read this book? We'd like to know what you think about it - write a review about Ethics and Nuclear Deterrence book by Geoffrey Goodwin and you'll earn 50c in Boomerang Bucks loyalty dollars (you must be a Boomerang Books Account Holder - it's free to sign up and there are great benefits!)