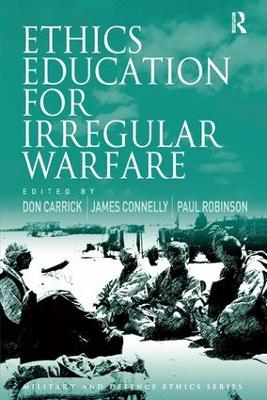 Following on from Ethics Education in the Military (eds. Paul Robinson, Nigel de Lee and Don Carrick: Ashgate 2008) which surveyed and critically analyzed the existing theory and practice of educating soldiers, sailors and airmen in the ethics of 'old fashioned' warfaring, this volume considers the extent to which such theory and practice is adequate to prepare members of the military to meet the more complex ethical challenges faced when engaging in irregular warfare in the 21st century. In recent years, events in Iraq and Afghanistan have highlighted the requirement that Western military personnel, drawn from the armed forces of many different countries, should behave in an ethical manner at all times. The contributors to this volume come from various disciplinary backgrounds, several are serving or former military officers and most are actively engaged in ethics education. The volume advances theoretical understanding of different approaches to ethics education and provides practical conclusions.

» Have you read this book? We'd like to know what you think about it - write a review about Ethics Education for Irregular Warfare book by Don Carrick and you'll earn 50c in Boomerang Bucks loyalty dollars (you must be a Boomerang Books Account Holder - it's free to sign up and there are great benefits!)

A Preview for this title is currently not available.
More Books By Don Carrick
View All