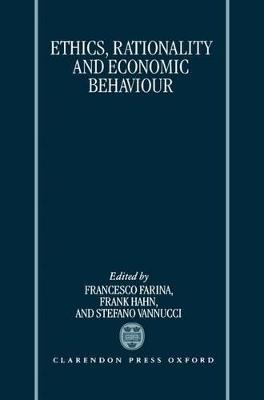 The connection between economics and ethics is as old as economics itself, and central to both disciplines. It is an issue that has recently attracted much interest from economists and philosophers. The connection is, in part, a result of the desire of economists to make policy prescriptions, which clearly require some normative criteria. More deeply, much economic theory is founded on the assumption of utility maximization, thereby creating an immediate
connection between the foundations of economics and the philosophical literature on utilitarianism and reasons for action. In fact, some influential contemporary approaches to ethics advocate
decision-theoretic or game-theoretic foundations of some sort for moral principles, while several economic theorists are now prepared to take into account the ethical dimensions of rational decisions. As a result, it appears that economics and ethics are somehow inextricably linked through theories of rational decision-making. Most of us would probably find it disturbing to concede that there are contradictions between the prescriptions of rationality and the
requirements of moral `rightness'. The essays included in the present volume provide a detailed analysis of the connections between ethics and economics as viewed from several different - sometimes conflicting -
perspectives. This book, the outcome of a joint meeting of philosophers and economists, has three main themes: the validity of utilitarianism much used by economists, the notion of fairness and equity, and the coherence of the rationality postulate of economics. The book does not reach any final conclusions, but it greatly illuminates the exact areas of possible disagreement and indeed the open-ended nature of ethical reasoning. There is much that economists, and especially welfare
economists, can learn from these papers - not least circumspection.

» Have you read this book? We'd like to know what you think about it - write a review about Ethics, Rationality, and Economic Behaviour book by Francesco Farina and you'll earn 50c in Boomerang Bucks loyalty dollars (you must be a Boomerang Books Account Holder - it's free to sign up and there are great benefits!)


A Preview for this title is currently not available.
More Books By Francesco Farina
View All