The Etiquette of Freedom

Gary Snyder, Jim Harrison, and The Practice of the Wild

Description - The Etiquette of Freedom by Gary Snyder

Gary Snyder joined his old friend, novelist Jim Harrison, to discuss their loves and lives and what has become of them throughout the years. Set amidst the natural beauty of the Santa Lucia Mountains, their conversations harnessing their ideas of all that is wild, sacred and intimate in this world move from the admission that Snyder's mother was a devout atheist to his personal accounts of his initiation into Zen Buddhist culture, being literally dangled by the ankles over a cliff. After years of living in Japan, Snyder returns to the States to build a farmhouse in the remote foothills of the Sierras, a homestead he calls Kitkitdizze.
For all of the depth in these conversations, Jim Harrison and Gary Snyder are humorous and friendly, and with the artfully interspersed dialogue from old friends and loves like Scott Slovic, Michael McClure, Jack Shoemaker, and Joanne Kyger, the discussion reaches a level of not only the personal, but the global, redefining our idea of the Beat Generation and challenging the future directions of the environmental movement and its association with "Deep Ecology."
The Etiquette of Freedom is an all-encompassing companion to the film The Practice of the Wild.

Other Editions - The Etiquette of Freedom by Gary Snyder 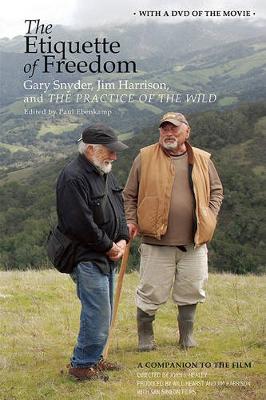 Book Reviews - The Etiquette of Freedom by Gary Snyder

» Have you read this book? We'd like to know what you think about it - write a review about Etiquette of Freedom book by Gary Snyder and you'll earn 50c in Boomerang Bucks loyalty dollars (you must be a Boomerang Books Account Holder - it's free to sign up and there are great benefits!)

Pulitzer Prize-winning poet Gary Snyder is the author of sixteen books of poetry and prose. Since 1970 he has lived with his family in the watershed of the South Yuba River in the foothills of the Sierra Nevada in Northern California. Jim Harrison was born in Michigan in 1937. A member of The American Academy of Arts and Letters, he has published more than thirty books including Returning to Earth, The English Major, and Legends of the Fall. His several books of poems include most recently Saving Daylight and In Search of Small Gods. He divides his time between Michigan and Arizona. Paul Ebenkamp previously edited the Counterpoint title Song of Myself, a collection of poems from Walt Whitman. He lives and works in Berkeley, California.

A Preview for this title is currently not available.
More Books By Gary Snyder
View All