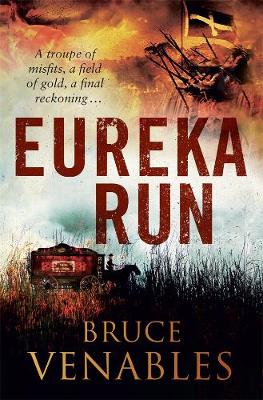 From a foggy London park to the streets of boom-time Melbourne; from the war-torn states of Southern China, to the overwhelming sights and sounds of the Victorian goldfields, this is a thrilling historical adventure set against the backdrop of the Eureka Stockade.

London 1852- Following a disastrous duel, John Farrington has lost everything - his army commission, his reputation, and the love of his life. When he becomes the target of a powerful, vengeful family he is forced to run, boarding a ship bound for Australia.

Hong Kong 1853- Master Feng, operatic impresario accused of treason, flees with his star performer, 'The Emperor's Nightingale'. Fate places them aboard a Yankee clipper ship to the great continent in the south.

Melbourne 1853- From humble beginnings, Cate Shearley is determined to make a prosperous life for herself and her son Jack, and has built up an enviable business as proprietor of the Golden Sheaf Hotel and Shearley's Variety Theatre. When her shows have the crowds flocking in, Cate realises there is even more money to be made entertaining the gold-rich miners of Ballarat.

But as Shearley's Travelling Variety Show sets off for the goldfields, two in the troupe have ruthless enemies in pursuit. And their world will explode at the Eureka diggings, where the fuse of revolution has already been lit . . .

» Have you read this book? We'd like to know what you think about it - write a review about Eureka Run book by Bruce Venables and you'll earn 50c in Boomerang Bucks loyalty dollars (you must be a Boomerang Books Account Holder - it's free to sign up and there are great benefits!)

Bruce Venables was born in Hobart and was a member of the Tasmanian Police Force. In 1976 he joined the Royal Hong Kong police as an Inspector. He served in the Hong Kong Marine Police as a launch commander and in the Tactical Unit as a platoon commander. In 1984 Bruce took up residence in Sydney and began his career as a writer of film and television scripts. He is also well known to Australian audiences as an actor. He is the author of a collection of poetry, The Spirit of the Bush, and four other novels- A Necessary Evil, The Time of the Dragons, Two Tigers, One Mountain and Scattered Monkeys. Bruce lives in Sydney, and is married to best selling novelist and actress, Judy Nunn.