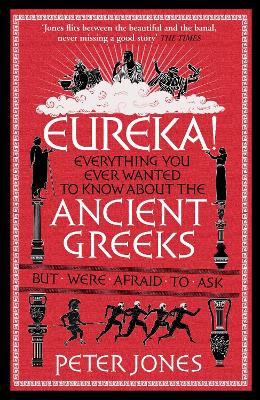 The ancient Greeks gave us our alphabet and much of our scientific, medical and cultural language; they invented democracy, atomic theory, and the rules of logic and geometry; laid the foundations of philosophy, history, tragedy and comedy; and debated everything from the good life and the role of women, to making sense of foreigners and the best form of government, all in the most sophisticated terms.

But who were they? In Eureka!, Peter Jones tells their epic story, which begins with the Trojan War and ends with the rise of the Roman Empire, by breaking down each major period into a series of informative nuggets. Along the way he introduces the major figures of the age, including Homer, Socrates, Plato, Aristotle, Alexander the Great, Euclid and Archimedes; explores the Greek myths and the role of the gods; provides fascinating insights into everyday life in ancient times; and shows us the very foundations of Western culture.

Eureka! is both entertaining and illuminating, and will delight anyone who ever wanted to know more about our ancient ancestors.

Other Editions - Eureka! by Peter Jones » Have you read this book? We'd like to know what you think about it - write a review about Eureka! book by Peter Jones and you'll earn 50c in Boomerang Bucks loyalty dollars (you must be a Boomerang Books Account Holder - it's free to sign up and there are great benefits!)

Peter Jones was educated at Cambridge University and taught Classics at Cambridge and at Newcastle University, before retiring in 1997. He has written a regular column, 'Ancient & Modern', in the Spectator for many years and is the author of various books on the Classics, including the bestselling Learn Latin and Learn Ancient Greek, as well as Reading Virgil's Aeneid I and II, Vote for Caesar and Veni, Vidi, Vici.