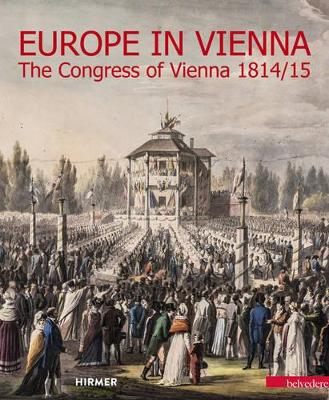 For ten whole months, from September 1814 to June 1815, the imperial residential city of Vienna was the centre of Europe. Never before had there been a comparable meeting of sovereigns and their ambassadors: two emperors (Tsar Alexander I, Emperor Francis I[II]), five kings (Frederick I of Wurttemberg, Frederick VI of Denmark, Frederick William III of Prussia, Frederick August I of Saxony, Maximilian I of Bavaria), also many princes and diplomats from practically all parts of the continent converged upon th e capital for the diplomatic proceedings. The re - ordering of the European continent aimed to secure political stability at last after the Napoleonic Wars. Europe's borders were redefined, the political balance of power re - established. These diplomatic proc eedings were accompanied by entertainments of all kinds - balls, festivities, sleigh rides and receptions, also theatre performances and musical events, the splendours of which were documented in words and pictures. Vienna blossomed as the centre of social life; the enhanced purchasing power also boosted the economy, brought foreign painters into the imperial capital, and spurred on all genres of art production on the home front. Thus the city became the political, cultural and social nucleus of Europe. Wi th numerous historical photographs, paintings and historical documents the publication will show the impact that this meeting had on the whole European continent and especially on Vienna. Several essays will draw light on the political, the cultural and th e entertainment side of this event of the century.

» Have you read this book? We'd like to know what you think about it - write a review about Europe in Vienna book by Agnes Husslein-Arco and you'll earn 50c in Boomerang Bucks loyalty dollars (you must be a Boomerang Books Account Holder - it's free to sign up and there are great benefits!)

Agnes Husslein-Arco is an art historian and director of the Belvedere Gallery in Vienna.

A Preview for this title is currently not available.
More Books By Agnes Husslein-Arco
View All