This book tells the dramatic story of the economic, social, political, and cultural transformation of Europe during the transition from the Cold War to the European Union. Ivan Berend charts, in particular, the overwhelming impact of the collapse of communism on every aspect of European life. Europe became safer and more united, and Central and Eastern Europe started on the difficult road to economic modernization. However, the western half of Europe also changed. European integration gained momentum. The single market and the common currency were introduced, and the Union enlarged from nine to twenty-seven countries. This period also saw a revolution in information and communication technology, the increasing impact of globalization and the radical restructuring of the political system. The book explores the impact of all of these changes as well as the new challenges posed by the economic crisis of 2008-9 and asks which way now for Europe?

Other Editions - Europe Since 1980 by Ivan T. Berend 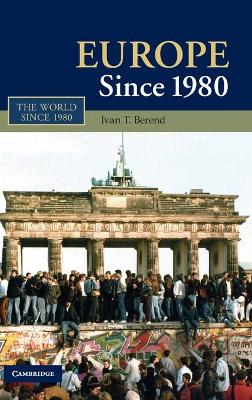 » Have you read this book? We'd like to know what you think about it - write a review about Europe Since 1980 book by Ivan T. Berend and you'll earn 50c in Boomerang Bucks loyalty dollars (you must be a Boomerang Books Account Holder - it's free to sign up and there are great benefits!)

Ivan T. Berend is Distinguished Professor of History at the University of California, Los Angeles and member of the British Academy and six European Academies of Sciences. His numerous publications include From the Soviet Bloc to the European Union (2009), An Economic History of Twentieth Century Europe (2006) and History Derailed: Central and Eastern Europe in the 'Long' Nineteenth Century (2003).