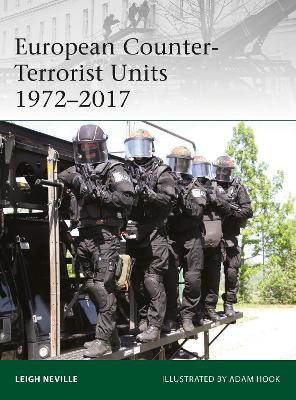 The Munich Olympics massacre in 1972 was a shock awakening to the public. In the decades since, European countries have faced a wide range of threats from Palestinian and home-grown terrorists, to the more recent world-wide jihadists. The threats they pose are widespread from aircraft hi-jacking and political assassinations to urban warfare against security forces, and murderous attacks on civilian crowd targets, forcing governments have had to invest ever-greater efforts in countering these threats.

This book traces the evolution of police (and associated military) counter-terrorist forces across Europe over the past 45 years. Using specially commissioned artwork and contemporary photographs, it details their organization, missions, specialist equipment, and their growing cross-border co-operation.

» Have you read this book? We'd like to know what you think about it - write a review about European Counter-Terrorist Units 1972-2017 book by Leigh Neville and you'll earn 50c in Boomerang Bucks loyalty dollars (you must be a Boomerang Books Account Holder - it's free to sign up and there are great benefits!)

Leigh Neville is an Australian national who has written a number of books on both modern conventional military units and special operations forces serving in Afghanistan and Iraq, their weapons and their vehicles, including six titles for Osprey with several more in development. He has also consulted on military topics for several wargame companies and television documentary makers. He lives in Sydney with his wife and two dogs. He can be contacted via his website at www.leighneville.com