The European Economy since 1945

Coordinated Capitalism and Beyond

Description - The European Economy since 1945 by Barry Eichengreen

In 1945, many Europeans still heated with coal, cooled their food with ice, and lacked indoor plumbing. Today, things could hardly be more different. Over the second half of the twentieth century, the average European's buying power tripled, while working hours fell by a third. The European Economy since 1945 is a broad, accessible, forthright account of the extraordinary development of Europe's economy since the end of World War II. Barry Eichengreen argues that the continent's history has been critical to its economic performance, and that it will continue to be so going forward. Challenging standard views that basic economic forces were behind postwar Europe's success, Eichengreen shows how Western Europe in particular inherited a set of institutions singularly well suited to the economic circumstances that reigned for almost three decades. Economic growth was facilitated by solidarity-centered trade unions, cohesive employers' associations, and growth-minded governments--all legacies of Europe's earlier history. For example, these institutions worked together to mobilize savings, finance investment, and stabilize wages. However, this inheritance of economic and social institutions that was the solution until around 1973--when Europe had to switch from growth based on brute-force investment and the acquisition of known technologies to growth based on increased efficiency and innovation--then became the problem. Thus, the key questions for the future are whether Europe and its constituent nations can now adapt their institutions to the needs of a globalized knowledge economy, and whether in doing so, the continent's distinctive history will be an obstacle or an asset.

Other Editions - The European Economy since 1945 by Barry Eichengreen 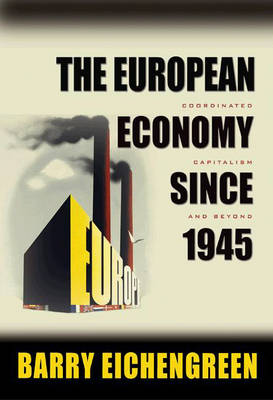 Book Reviews - The European Economy since 1945 by Barry Eichengreen

» Have you read this book? We'd like to know what you think about it - write a review about European Economy since 1945 book by Barry Eichengreen and you'll earn 50c in Boomerang Bucks loyalty dollars (you must be a Boomerang Books Account Holder - it's free to sign up and there are great benefits!)

Barry Eichengreen is George C. Pardee and Helen N. Pardee Professor of Economics and Political Science at the University of California, Berkeley. His books include "Golden Fetters: The Gold Standard and the Great Depression, 1919-1939" and "Globalizing Capital: A History of the International Monetary System" (Princeton).