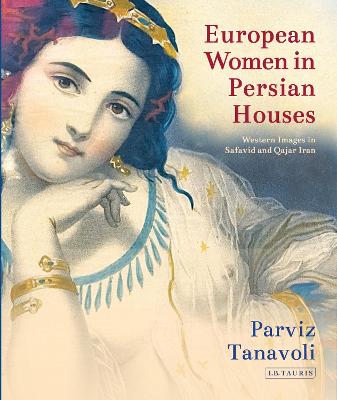 During the course of the 19th century, a relatively modern medium entered the private space of Iranian houses of the wealthy and became a popular feature of interior design in Persia. This was print media - lithographed images on paper and postcards - and their subject was European women. These idealised images adorned houses across the country throughout the Qajar period and this trend was particularly fashionable in Isfahan and mural decorations at the entrance gate of the Qaysarieh bazaar. The interest in images of Western women was an unusual bi-product of Iran's early political and cultural encounters with the West. In a world where women were rarely seen in public and, even then, were heavily veiled, the notion of European women dressed in - by Iranian standards - elegant and revealing clothing must have sparked much curiosity and some titillation among well-to-do merchants and aristocrats who felt the need to create some association, however remote, with these alien creatures. The introduction of such images began during the Safavid era in the 17th century with frescoes in royal palaces.
This spread to other manifestations in the form of tile work and porcelain in the Qajar era, which became a testament to the popularity of this visual phenomenon among Iran's urban elite in the 19th and early 20th century. Parviz Tanavoli, the prominent Iranian artist and sculptor, here brings together the definitive collection of these unique images. European Women in Persian Houses will be essential for collectors and enthusiasts interested in Iranian art, culture and social history.

» Have you read this book? We'd like to know what you think about it - write a review about European Women in Persian Houses book by Parviz Tanavoli and you'll earn 50c in Boomerang Bucks loyalty dollars (you must be a Boomerang Books Account Holder - it's free to sign up and there are great benefits!)

Parviz Tanavoli is one of the foremost Iranian artists. Born in Tehran in 1937, Tanavoli has studied sculpting in Iran and Italy. His art can be seen in major museums, including the British Museum, Metropolitan Museum of Art, Museum of Modern Art, New York, Museum of Modem Art Vienna, Guggenheim Museum of Abu-Dhabi, National Museum of Qatar, Tate Modern London, and Tehran Museum of Contemporary Art. Tanavoli's passion is the art and culture of Iran. During the last forty years, he has continually travelled throughout the country, documenting and collecting tribal and rustic weavings and other historical artefacts and objects. He has authored over forty publications. Among these are: An Introduction to the History of Graphic Design in Iran (2014), Undiscovered Minimalism (2011), Afshar: Tribal Rugs form Eastern Iran (2010), Tombstones (date?), Gabbeh: Art Underfoot (2004), Persian Flat-Weaves (2002), Horse and Camel Trappings from Tribal Iran (1998), Sofreh of Kamo (1996), Kings, Heroes and Lovers (1994), Shahsavan: Iranian Rugs and Textiles (1985), Lion Rugs: The Lion in the Art and Culture of Iran (1985) Locks from Iran (1977).

A Preview for this title is currently not available.
More Books By Parviz Tanavoli
View All