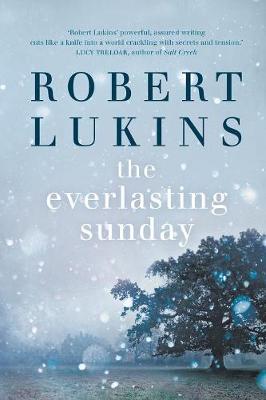 During the freezing English winter of 1962, seventeen-year-old Radford is sent to Goodwin Manor, a home for boys who have been 'found by trouble'. Drawn immediately to the charismatic West, Radford soon discovers that each one of them has something to hide.

Life at the Manor offers a refuge of sorts, but unexpected arrivals threaten the world the boys have built. Will their friendship be enough when trouble finds them again?

At once both beautiful and brutal, The Everlasting Sunday is a haunting debut novel about growing up, growing wild and what it takes to survive.

» Have you read this book? We'd like to know what you think about it - write a review about Everlasting Sunday book by Robert Lukins and you'll earn 50c in Boomerang Bucks loyalty dollars (you must be a Boomerang Books Account Holder - it's free to sign up and there are great benefits!)

Goodwin Manor is a place of last resorts, a place for the outcasts of society, young males that have erred that once too many. Situated far from anything, the boys are mostly left to their own devices. Tutors come and go. Edward Wilson (Teddy to the boys) is the overseer; he is tired and withdrawn most of the time only intervening when the situation gets out of hand. Teddy has underlying problems of his own. Lilly, the cook, is a motherly figure demanding respect but also full of kindness.

The story is set in the winter of 1962. England’s bleakest winter for 82 years.

Radford arrives unceremoniously dropped off by his uncle and is quickly taken under the wing of the charismatic West. There is much introspection and confidences shared between the two in their late-night smoking sessions. All the characters seem to be at a place in time they would rather not be. Much like a boarding school the boys sneak out at night to smoke and drink alcohol. There were no rules and the boys had their own methods of punishment when warranted and found things to keep them occupied. Radford at first tries to make sense of the hierarchy and happenings in the Manor.

Winter has its own role in this novel, becoming a character as it watches and waits placing scorn on humans trying to live in its mightiest moments.

”These boys imagining themselves conquering miles, they pushed only deeper into the trap. Winter wondered who would miss them.......Yes, it could bury them now........ Winter would watch on for now. There was no risk of missing its chance, for Winter always returned.”

Lukin’s prose are lyrical and haunting with an underlying empathy and they give a mystical quality to the story.

Occasionally you come across a book that your words cannot describe the way it is written and how it makes you feel. The Everlasting Sunday is such a book.

The Everlasting Sunday is an atmospheric tale of rejection, friendship, bonding and survival.

Robert Lukins lives in Melbourne and has worked as an art researcher and journalist. His writing has been published widely, including in The Big Issue, Rolling Stone, Crikey, Broadsheet and Overland. The Everlasting Sunday is his first novel.