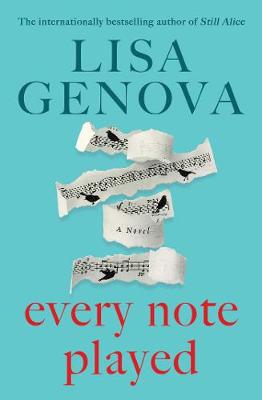 From the bestselling author of STILL ALICE comes a powerful and heartbreakingly moving exploration of regret, forgiveness, freedom - and what it means to be alive.

An accomplished concert pianist, Richard's inspired performances received standing ovations from audiences all over the world. Every one of his fingers was a finely calibrated instrument, dancing across the keys and striking each note with exacting precision. That was eight months ago.

Richard now has ALS, and his entire right arm is paralysed. His fingers are impotent, still, devoid of possibility. The loss of his hand feels like a death, a loss of true love, a divorce - his divorce. He knows his left arm will go next.

Three years ago, Karina removed their framed wedding picture from the living room wall and hung a mirror there instead. But she still hasn't moved on. Karina is paralysed by excuses and fear, stuck in an unfulfilling life as a piano teacher, afraid to pursue the path she abandoned as a young woman, blaming Richard and their failed marriage for all of it.

When Richard is no longer able to live on his own, Karina becomes his reluctant caretaker. As Richard's muscles, voice, and breath fade, both he and Karina try to reconcile their past before it's too late.

As poignant and powerful as Jojo Moyes's Me Before You, Every Note Played is a masterful exploration of redemption and what it means to find peace inside of forgiveness.
Praise for Every Note Played

'Only Lisa Genova could bring such honesty and grace to the war against ALS. Searing writing and a must-read.' Helen Simonson, New York Times bestselling author of Major Pettigrew's Last Stand

'Lisa Genova writes with humor and humanity, but also with a scientist's eye about the daily depredations of disease, the incremental losses, the slower acceptances, the rage, the love, the courage, and, strangely enough, the joy. A nocturne of the soul. Read this book, read it all night, and wake up glad to be alive.' Bill Roorbach, author of Life Among Giants, The Remedy for Love and The Girl of the Lake

'Genova expertly details the devastation ALS wreaks on Richard, and though her latest is a sometimes difficult read, she finds hope in the opportunities Richard has to repair his relationships with his daughter and brothers before it's too late.' Booklist


Other Editions - Every Note Played by Lisa Genova 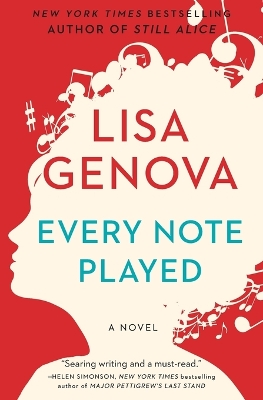 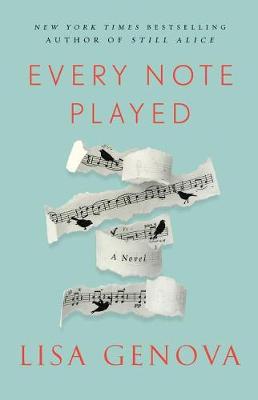 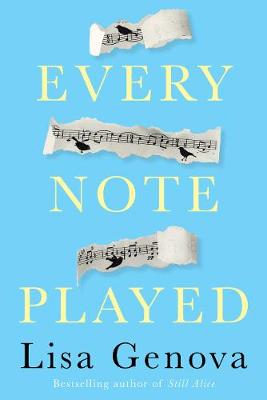 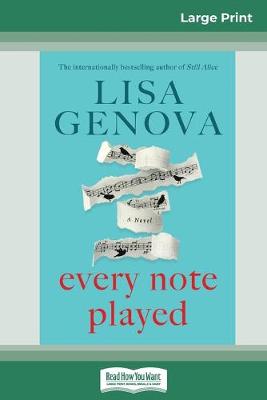 View all editions of Every Note Played by Lisa Genova

» Have you read this book? We'd like to know what you think about it - write a review about Every Note Played book by Lisa Genova and you'll earn 50c in Boomerang Bucks loyalty dollars (you must be a Boomerang Books Account Holder - it's free to sign up and there are great benefits!)

Every Note Played is an emotional and well researched story on the degenerative disease ALS. When Richard, a concert pianist, is diagnosed with ALS he is at first in denial but as the degeneration of his muscles progresses he must face a life without his beloved piano. Richard is a person who has a single minded love of playing piano that is at obsession level. the notes and tune are all he thinks of during his waking hours.

"He is no longer playing the music. The music is playing him." "Without the piano, how can he live?"

Genova describes the symptoms and the progress of the disease in a poetic and personally touching voice laced with overwhelming compassion. The characters' inner feelings are expressed with clarity and sensitivity.

Richard and his wife are divorced after a bitter build-up of blame on both sides. The accusations and hurt had still not been resolved and as it burned away in both of them neither knew how to start the repair.

Genova focuses on relationships and forgiveness, the all consuming job of caring for a terminally ill loved one and the wonderful job done by home help workers. As devastating as the disease is, the advances in technology to aid the sufferers and their carers is amazing to read about. A recommended read. The emotion is real and not over dramatised *I received a free copy from the publisher.

A Preview for this title is currently not available.
More Books By Lisa Genova
View All