Description - Everyone Lies by A.D. Garrett

DI Kate Simms is on the fast track to nowhere. Five years ago she helped a colleague when she shouldn't have. She's been clawing her way back from a demotion ever since. Professor Nick Fennimore is a failed genetics student, successful gambler, betting agent, crime scene officer, chemistry graduate, toxicology specialist and one-time scientific advisor to the National Crime Faculty. He is the best there is, but ever since his wife and daughter disappeared he's been hiding away in Scotland, working as a forensics lecturer.In Manchester, drug addicts are turning up dead and Simms' superior is only too pleased to hand the problem to her. Then a celebrity dies and the media gets interested. Another overdose victim shows up, but this time the woman has been systematically beaten and all identifying features removed. The evidence doesn't add up; Simms' superiors seem to be obstructing her investigation; and the one person she can't afford to associate with is the one man who can help: Fennimore.

Other Editions - Everyone Lies by A.D. Garrett 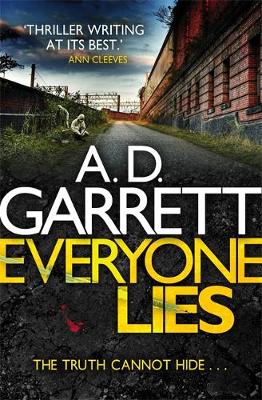 » Have you read this book? We'd like to know what you think about it - write a review about Everyone Lies book by A.D. Garrett and you'll earn 50c in Boomerang Bucks loyalty dollars (you must be a Boomerang Books Account Holder - it's free to sign up and there are great benefits!)

A. D. Garrett is the pseudonym for the writing collaboration of prize-winning thriller writer Margaret Murphy and forensic scientist Professor Dave Barclay. Margaret Murphy is the author of nine psychological thrillers. She lectures on writing and is a former Royal Literary Fund Writing Fellow. She is founder of Murder Squad, a touring collective of crime writers, and was Chair of the Crime Writers' Association in 2009-10. Professor Barclay holds two university posts and is a forensic adviser to the police forces and the media. He was Head of Physical Evidence at the UK National Crime and Operations Faculty for 10 years. He is currently working for several UK police forces and a state of Australia on high profile murders. He is part of the 'Murder, Mystery and Microscopes' team which aims to explain the real science behind popular crime fiction via a national series of public lectures. Everyone Lies is their first collaboration.

A Preview for this title is currently not available.
More Books By A.D. Garrett
View All