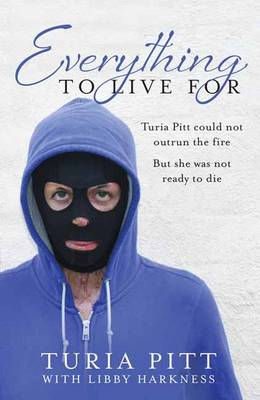 Everything to Live For

Description - Everything to Live For by Turia Pitt

Everything to Live For is the story of one young woman's survival against extraordinary odds, a testament to the human spirit.

In September 2011, Turia Pitt, a beautiful 25-year-old mining engineer working her dream job in the far north of Western Australia, entered an ultra-marathon race that would change her life forever. Trapped by a fire in a gorge in the remote Kimberly region, Turia and five other competitors had nowhere to run. Turia escaped with catastrophic burns to 65 per cent of her body.

With too little unburned skin left for skin grafts, Turia was put in an induced coma in the Burns Unit at Sydney's Concord Hospital while her body fought life-threatening infections and her surgeons imported skin from California. She lost the fingers on her right hand and her fingers on her left are partially fused together. She needed a new nose. There have been numerous operation, yet there are many more to come.

While the story of Turia's survival involves many people - other race competitors, her rescuers, medical professionals - at its core is the strong will of Turia herself as she continues the long rehabilitation process with the loving support of her partner, Michael Hoskin, and that of their families in their New South Wales south coast hometown of Ulladulla, where the local community has rallied, raising funds to help with huge medical bills.

Everything to Live For is also a love story. Michael, Turia's handsome teenage crush who became the love of her life, now cares for her as they plan a new life together; he is there to encourage Turia in her determination to move forward in an outwardly different body.

Despite facing a future with multiple challenges, Turia is optimistic. She is driving again and studying for her Master's degree. She is walking in marathons and would one day like to run again. Above all, she wants her story to make a difference- her mission is to make skin a more prominent organ in the repertoire of donated organs.

It is a miracle Turia lived when she was expected to die. But Turia was not ready to die - she had too much to live for.

Buy Everything to Live For by Turia Pitt from Australia's Online Independent Bookstore, Boomerang Books.

Other Editions - Everything to Live For by Turia Pitt 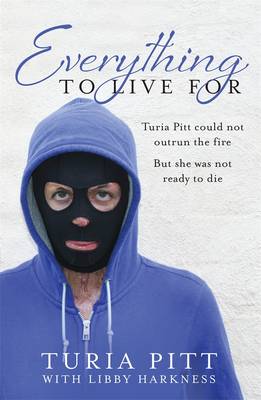 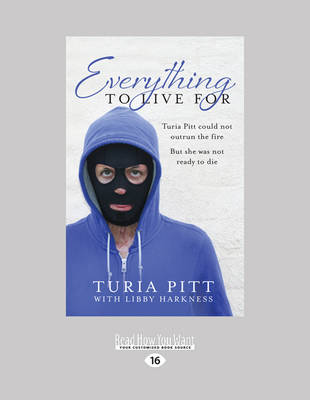 Book Reviews - Everything to Live For by Turia Pitt

» Have you read this book? We'd like to know what you think about it - write a review about Everything to Live For book by Turia Pitt and you'll earn 50c in Boomerang Bucks loyalty dollars (you must be a Boomerang Books Account Holder - it's free to sign up and there are great benefits!)

Turia Pitt has a double degree in Mining Engineering and Science. She worked as a model before landing her dream job with Rio Tinto at their prestigious Argyle Diamond Mine and moving to Kununurra with her partner, Michael. Their lives were turned upside-down when she was trapped by a grassfire in a 100 kilometre ultra-marathon in September 2011, and suffered burns to 65 per cent of her body. Turia lives in her hometown of Ulladulla. She is studying for her Masters and travels the world giving inspirational speeches. She is a well-recognised humanitarian, dedicating her time to causes she is passionate about. Interplast is one such cause - a charity that provides free reconstructive surgery to people in developing countries. Turia was named the NSW Premier's Woman of the Year and was a finalist for Young Australian of the Year. She also graced the cover of the Australian Women's Weekly and is a judge for the Australian Woman of the Future Fund.