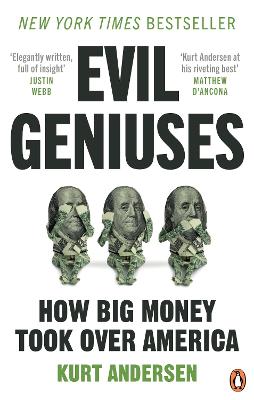 Evil Geniuses: The Unmaking of America - A Recent History

Description - Evil Geniuses: The Unmaking of America - A Recent History by Kurt Andersen

A deep dive into how big business took over American politics, from the critically acclaimed author of Fantasyland

How an elite cabal rewrote the American dream for their gain - and left the rest of world behind.

Evil Geniuses is the secret history of how, over the last half century, from even before Ronald Reagan through Donald Trump, America has sharply swerved away from its dream of progress for the many to a system of unfettered profit and self-interest for the few.

As the social liberation of the 1960s finally ended in the chaos of Vietnam and Watergate, a cabal of rich industrialists, business chiefs, wide-eyed libertarians and right-wing economic radicals were waiting, determined to claw back everything they saw as rightfully theirs.

Largely out of sight, they rapidly built and funded a new empire of think tanks and academic institutions and professional organisations, lobbying and political groups, using them to transform politics, media, finance, the legal system and US laws to reinvent and control the political economy. A throwback to the robber barons of a century earlier, they sold the remade system to the people as a nostalgic return to traditional American values. Within a decade, America's flourishing forward-thinking vision was incarcerated by the unchecked financial accumulation and political power of the super-rich.

Now, the moneymen are running the show.

In this hugely entertaining and deeply researched cultural and economic expose, New York Times bestselling author Kurt Andersen maps the rich history of intricate networks, unlikely connections and dark truths which are controlling a nation, revealing how on earth America got to where it is now - and what it might do to win its progressive future back.

Other Editions - Evil Geniuses: The Unmaking of America - A Recent History by Kurt Andersen 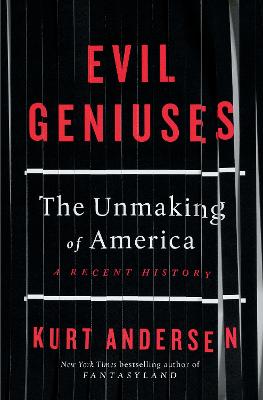 » Have you read this book? We'd like to know what you think about it - write a review about Evil Geniuses: The Unmaking of America - A Recent History book by Kurt Andersen and you'll earn 50c in Boomerang Bucks loyalty dollars (you must be a Boomerang Books Account Holder - it's free to sign up and there are great benefits!)


A Preview for this title is currently not available.
More Books By Kurt Andersen
View All