Evolution, Culture, and the Human Mind

Description - Evolution, Culture, and the Human Mind by Mark Schaller

An enormous amount of scientific research compels two fundamental conclusions about the human mind: The mind is the product of evolution; and the mind is shaped by culture. These two perspectives on the human mind are not incompatible, but, until recently, their compatibility has resisted rigorous scholarly inquiry. Evolutionary psychology documents many ways in which genetic adaptations govern the operations of the human mind. But evolutionary inquiries only occasionally grapple seriously with questions about human culture and cross-cultural differences. By contrast, cultural psychology documents many ways in which thought and behavior are shaped by different cultural experiences. But cultural inquires rarely consider evolutionary processes. Even after decades of intensive research, these two perspectives on human psychology have remained largely divorced from each other. But that is now changing - and that is what this book is about. Evolution, Culture, and the Human Mind is the first scholarly book to integrate evolutionary and cultural perspectives on human psychology. The contributors include world-renowned evolutionary, cultural, social, and cognitive psychologists.
These chapters reveal many novel insights linking human evolution to both human cognition and human culture -- including the evolutionary origins of cross-cultural differences. The result is a stimulating introduction to an emerging integrative perspective on human nature.

Other Editions - Evolution, Culture, and the Human Mind by Mark Schaller 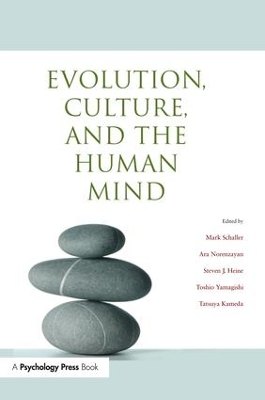 » Have you read this book? We'd like to know what you think about it - write a review about Evolution, Culture, and the Human Mind book by Mark Schaller and you'll earn 50c in Boomerang Bucks loyalty dollars (you must be a Boomerang Books Account Holder - it's free to sign up and there are great benefits!)

A Preview for this title is currently not available.
More Books By Mark Schaller
View All