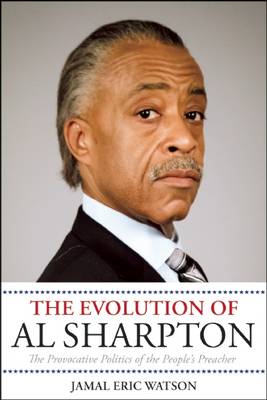 The Evolution of Al Sharpton

The Provocative Politics of the People's Preacher

Description - The Evolution of Al Sharpton by Jamal Eric Watson

Once marginalized merely as a "rabble rouser" and "racial provocateur," Reverend Alfred Charles Sharpton, Jr, has remade himself over and over again throughout his decades-long career. He has emerged stronger in each incarnation and has prevailed as the nation's most powerful black political powerbroker, eclipsing Jesse Louis Jackson, who himself inherited that role from Martin Luther King, Jr. Sharpton has miraculously transcended the divisive racial politics of his past and is now courted by white and black politicians alike, including President Barack Obama, who will need his help to solidify his base within the African-American community as the 2012 presidential elections approach.
Dispensing with his flamboyant physical appearance of yesteryear the suede jogging suits combined with the gold medallion and the bouffant hairdo Sharpton is transformed. He is currently the host of a syndicated radio talk show produced by media mogul Cathy Hughes. He is a multimillionaire, thanks in large part to his role as anchor of a nationally televised MSNBC news show. Two decades ago, Sharpton struggled to pay his bills and faced numerous eviction hearings. He has gone from the embarrassing epicenter of the 1987 Tawana Brawley case, in which a 15-year-old received national media attention for falsely accusing six men (including an Assistant District Attorney) of raping her, to a (short-lived) candidate for the 2004 presidential nomination.
Sharpton has become a part of the country's cultural and celebrity elite: he belongs to social clubs with actors Alec Baldwin and Laurence Fishburne as well as former political nemesis Rudolph Giuliani; he flew to Los Angeles to personally bless the newborn twins of Mariah Carey and Nick Cannon; and he presided over the funeral ceremonies of Michael Jackson and James Brown, the man Sharpton calls a father-like figure who mentored and groomed him after his biological father deserted him at age 10 and impregnated his stepsister.
The Evolution of Al Sharpton is the first comprehensive biography to shine a critical spotlight on Sharpton, and it will trace the mesmerizing story of Sharpton's continual reincarnation. Based on over 60 hours of exclusive interviews with Sharpton, as well as interviews with his closest associates, adversaries, and family members including an unprecedented interview with Al Sharpton, Sr., The Evolution of Al Sharpton will elucidate and illuminate one of the nation's most controversial and evolved black civil rights leaders of the last three decades, and one who will not be fading from the limelight anytime soon.

» Have you read this book? We'd like to know what you think about it - write a review about Evolution of Al Sharpton book by Jamal Eric Watson and you'll earn 50c in Boomerang Bucks loyalty dollars (you must be a Boomerang Books Account Holder - it's free to sign up and there are great benefits!)

Jamal Eric Watson is a journalist and contributing editor for Diverse: Issues in Higher Education magazine. He has worked as a reporter for The Baltimore Sun, The Boston Globe, and served as the executive editor of The New York Amsterdam News. Michael Eric Dyson, named by Ebony as one of the hundred most influential black Americans, is the author of sixteen books, including Holler if You Hear Me, Is Bill Cosby Right? and I May Not Get There With You: The True Martin Luther King Jr. He is currently University Professor of Sociology at Georgetown University. He lives in Washington, D.C.