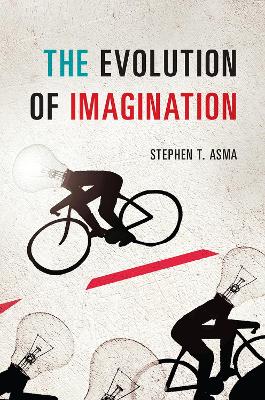 The Evolution of Imagination

Description - The Evolution of Imagination by Stephen T. Asma

Consider Miles Davis, horn held high, sculpting a powerful musical statement full of tonal patterns, inside jokes, and thrilling climactic phrases-all on the fly. Or think of a comedy troupe riffing on a couple of cues from the audience until the whole room is erupting with laughter. Or maybe it's a team of software engineers brainstorming their way to the next Google, or the Einsteins of the world code-cracking the mysteries of nature. Maybe it's simply a child playing with her toys. What do all of these activities share? With wisdom, humor, and joy, philosopher Stephen T. Asma answers that question in this book: imagination. And from there he takes us on an extraordinary tour of the human creative spirit.

Guided by neuroscience, animal behavior, evolution, philosophy, and psychology, Asma burrows deep into the human psyche to look right at the enigmatic but powerful engine that is our improvisational creativity-the source, he argues, of our remarkable imaginational capacity. How is it, he asks, that a story can evoke a whole world inside of us? How are we able to rehearse a skill, a speech, or even an entire scenario simply by thinking about it? How does creativity go beyond experience and help us make something completely new? And how does our moral imagination help us sculpt a better society? As he shows, we live in a world that is only partly happening in reality. Huge swaths of our cognitive experiences are made up by "what-ifs," "almosts," and "maybes," an imagined terrain that churns out one of the most overlooked but necessary resources for our flourishing: possibilities. Considering everything from how imagination works in our physical bodies to the ways we make images, from the mechanics of language and our ability to tell stories to the creative composition of self-consciousness, Asma expands our personal and day-to-day forms of imagination into a grand scale: as one of the decisive evolutionary forces that has guided human development from the Paleolithic era to today. The result is an inspiring look at the rich relationships among improvisation, imagination, and culture, and a privileged glimpse into the unique nature of our evolved minds.

Book Reviews - The Evolution of Imagination by Stephen T. Asma

» Have you read this book? We'd like to know what you think about it - write a review about Evolution of Imagination book by Stephen T. Asma and you'll earn 50c in Boomerang Bucks loyalty dollars (you must be a Boomerang Books Account Holder - it's free to sign up and there are great benefits!)

Stephen T. Asma is Distinguished Scholar and professor of philosophy in the Department of Humanities as well as Fellow of the Research Group in Mind, Science, and Culture at Columbia College Chicago. He is the author of numerous books, including Stuffed Animals and Pickled Heads, The Gods Drink Whiskey, On Monsters, and Against Fairness, the latter also published by the University of Chicago Press.

A Preview for this title is currently not available.
More Books By Stephen T. Asma
View All