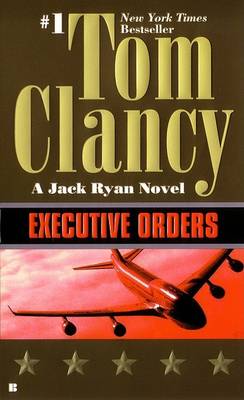 "Debt of Honor" ended with Tom Clancy's most shocking conclusion ever: a joint session of Congress destroyed, the President dead, most of the Cabinet and the Congress dead, the Supreme Court and Joint Chiefs likewise. Dazed and confused, the man who only minutes before had been confirmed as the new Vice-President of the United States is told that he is now President. President John Patrick Ryan. And that is where Executive Orders begins. Ryan had agreed to accept the vice-presidency only as caretaker for a year, and now suddenly, an incalculable weight has fallen on his shoulders. How do you run a government without a government? Where do you even begin? With stunning force, Ryan's responsibilities crush in on him. He must calm an anxious and grieving nation, allay the skepticism of the world's leaders, conduct a swift investigation of the tragedy, and arrange a massive state funeral - all while attempting to reconstitute a Cabinet and a Congress with the greatest possible speed. But that is not all. Many eyes are on him now, and many of them are unfriendly. In Beijing, Tehran, and other world capitals, including Washington, D.C., there are those eager to take advantage where they may, some of whom bear a deep animus toward the United States - some of whom, from Ryan's past, harbor intense animosity toward the new President himself. Soon they will begin to move on their opportunities; soon they will present Jack Ryan with a crisis so great even he cannot imagine it.

» Have you read this book? We'd like to know what you think about it - write a review about Executive Orders book by CLANCY TOM and you'll earn 50c in Boomerang Bucks loyalty dollars (you must be a Boomerang Books Account Holder - it's free to sign up and there are great benefits!)

A little more than thirty years ago Tom Clancy was a Maryland insurance broker with a passion for naval history. Years before, he had been an English major at Baltimore's Loyola College and had always dreamed of writing a novel. His first effort, The Hunt for Red October--the first of the phenomenally successful Jack Ryan novels--sold briskly as a result of rave reviews, then catapulted onto the New York Times bestseller list after President Reagan pronounced it "the perfect yarn." From that day forward, Clancy established himself as an undisputed master at blending exceptional realism and authenticity, intricate plotting, and razor-sharp suspense. He passed away in October 2013.

A Preview for this title is currently not available.
More Books By CLANCY TOM
View All