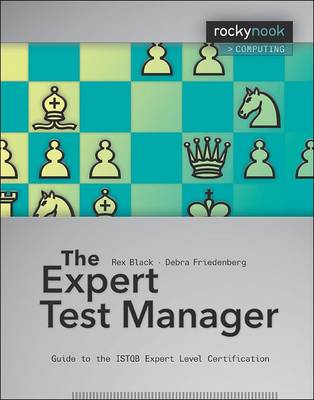 This book covers the ISTQB Expert Level Test Manager syllabus and is a complete, one-stop preparation guide for the reader who is otherwise qualified (based on experience as a test manager) to take the Expert Level Test Manager exam. Included are extensive hands-on exercises and sample exam questions that comply with ISTQB standards for Expert Level exams. The ISTQB certification program is the leading software tester certification program in the world. With more than 240,000 certificates issued and a global presence in 70 countries, you can be confident in the value and international stature that the ISTQB Expert Level certificate can offer you.

» Have you read this book? We'd like to know what you think about it - write a review about Expert Test Manager book by Rex Black and you'll earn 50c in Boomerang Bucks loyalty dollars (you must be a Boomerang Books Account Holder - it's free to sign up and there are great benefits!)

With over a quarter-century of software and systems engineering experience, Rex Black is President of Rex Black Consulting Services (www.rbcs-us.com), a leader in software, hardware, and systems testing. For over fifteen years RBCS has delivered services in consulting, outsourcing, and training for software and hardware testing. Employing the industry's most experienced and recognized consultants, RBCS conducts product testing, builds and improves testing groups, and hires testing staff for hundreds of clients worldwide. Ranging from Fortune 20 companies to start-ups, RBCS clients save time and money through improved product development, decreased tech support calls, improved corporate reputation, and more. As the leader of RBCS, Rex is the most prolific author practicing in the field of software testing today. His popular first book, Managing the Testing Process, has sold over 40,000 copies around the world, including Japanese, Chinese, and Indian releases, and is now in its third edition. His six other books on testing-Advanced Software Testing: Volumes I, II, and III, Critical Testing Processes, Foundations of Software Testing, and Pragmatic Software Testing-have also sold tens of thousands of copies, including Hebrew, Indian, Chinese, Japanese, and Russian editions. He has written over thirty articles; presented hundreds of papers, workshops, and seminars; and given about fifty keynote and other speeches at conferences and events around the world. Rex is the immediate past President of the International Software Testing Qualifications Board (ISTQB) and a Director of the American Software Testing Qualifications Board (ASTQB). Debra Friedenberg has been involved in the software testing profession for over 25 years and has managed teams at a variety of organizations, including Software Publishing Corporation, Autodesk, Wells Fargo Bank, and IBM. She has been a member of the ASTQB Board of Directors since 2007 and is a co-author of the ISTQB Expert Test Manager and Foundation Level syllabi. Debra resides in Sonoma County, California, with her husband. When not involved in testing projects, she spends her free time helping out on their world-class Pinot Noir vineyard.

A Preview for this title is currently not available.
More Books By Rex Black
View All