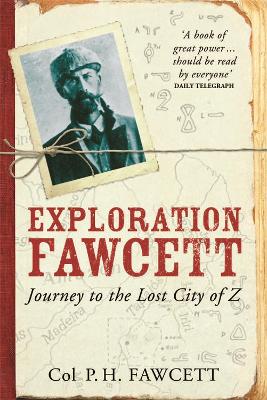 The disappearance of Colonel Fawcett in the Matto Grosso remains one of the great unsolved mysteries of today.In 1925 Fawcett was convinced that he had discovered the location of a lost city; he had set out with two companions, one of whom was his eldest son, to destination 'Z', never to be heard of again.His younger son, Brian Fawcett, has compiled this book from letters and records left by his father whose last written words to his wife were: 'You need have no fear of any failure...'This thrilling and mysterious account of Fawcett's ten years of travels in deadly jungles and forests in search of a secret city was compiled from manuscripts, letters and logbooks by his son.

» Have you read this book? We'd like to know what you think about it - write a review about Exploration Fawcett book by Col. Percy Fawcett and you'll earn 50c in Boomerang Bucks loyalty dollars (you must be a Boomerang Books Account Holder - it's free to sign up and there are great benefits!)

Colonel Percy Harrison Fawcett was born in 1867 in Devon, England. At the age of nineteen he was given a commission in the Royal Artillery. He served in Ceylon for several years where he met and married his wife. Later he performed secret service work in North Africa. Fawcett found himself bored with Army life and learned the art of surveying, hoping to land a more interesting job. Then in 1906 came the offer from the Society: His ticket to adventure.