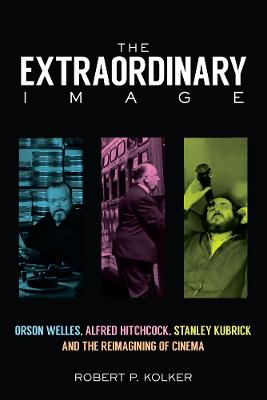 Welles. Hitchcock. Kubrick. These names appear on nearly every list of the all-time greatest filmmakers. But what makes these directors so great? Despite their very different themes and sensibilities, is there a common genius that unites them and elevates their work into the realm of the sublime?

The Extraordinary Image takes readers on a fascinating journey through the lives and films of these three directors, identifying the qualities that made them cinematic visionaries. Reflecting on a lifetime of teaching and writing on these filmmakers, acclaimed film scholar Robert P. Kolker offers a deeply personal set of insights on three artists who have changed the way he understands movies. Spotlighting the many astonishing images and stories in films by Welles, Hitchcock, Kubrick, he also considers how they induce a state of amazement that transports and transforms the viewer.

Kolker's accessible prose invites readers to share in his own continued fascination and delight at these directors' visual inventiveness, even as he lends his expertise to help us appreciate the key distinctions between the unique cinematic universes they each created. More than just a celebration of three cinematic geniuses, The Extraordinary Image is an exploration of how movies work, what they mean, and why they bring us so much pleasure.

» Have you read this book? We'd like to know what you think about it - write a review about Extraordinary Image book by Robert P. Kolker and you'll earn 50c in Boomerang Bucks loyalty dollars (you must be a Boomerang Books Account Holder - it's free to sign up and there are great benefits!)

Robert P. Kolker has been teaching and writing about film for over forty years. He is the author or editor of A Cinema of Loneliness (4th ed.,); The Altering Eye; Stanley Kubrick's 2001: A Space Odyssey: New Essays; The Oxford Handbook of Film and Media Studies; The Cultures of American Film; and Film, Form, and Culture.

A Preview for this title is currently not available.
More Books By Robert P. Kolker
View All