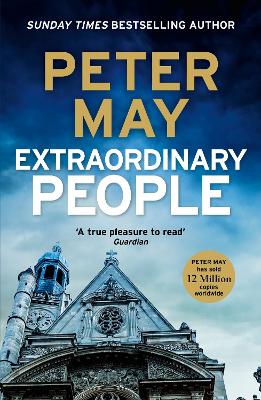 Description - Extraordinary People by Peter May

PARIS. An old mystery. As midnight strikes, a man desperately seeking sanctuary flees into a church. The next day, his sudden disappearance will make him famous throughout France. A new science. Forensic expert Enzo Macleod takes a wager to solve the seven most notorious French murders using modern technology - and a total disregard for the justice system. A fresh trail. Deep in the catacombs below the city, he unearths dark clues deliberately set - and as he draws closer to the killer, discovers that he is to be the next victim.

» Have you read this book? We'd like to know what you think about it - write a review about Extraordinary People book by Peter May and you'll earn 50c in Boomerang Bucks loyalty dollars (you must be a Boomerang Books Account Holder - it's free to sign up and there are great benefits!)

4 stars Extraordinary People is the first book in the Enzo Macleod Investigation series by Scottish journalist, screenwriter and author, Peter May. In late August 1996, French celebrity Jacques Gaillard went missing. It’s one of seven unsolved cases that journalist Roger Raffin has included in his recently published book, and a casual wager between friends sees biology professor and former forensic expert, Enzo Macleod leave his home in Cahors to review the case.

Having read all the information Raffin has acquired over the ten intervening years, Enzo manages, in three deft strokes, to prove that Gaillard was murdered. The accidental discovery of partial remains, together with a seemingly random set of objects, has him all the more determined to find the rest of the man, and track down his killers.

But Raffin’s newspaper article makes the police look inept, and when, through diligent research into the bizarre collection of objects, they locate a second cache of body parts and equally puzzling objects, Enzo fears they are on a macabre scavenger hunt across France. Meanwhile, he is warned off by the Minister for Justice, the Instructing Judge, and his own boss at the University. To no effect. He’s hooked. Then people start dying…

Enzo proposes to rely on his powers of deduction to solve this cold case, but soon realises he needs the assistance of a tech-savvy student and the insider-knowledge of acquaintances. Together they decipher cryptic clues, jumping to conclusions through what at times seem tenuous connections, occasionally mis-stepping, sometimes drawing a long bow, all leading to a rather (too) lengthy underground trek, where a classic denouement and a dramatic last-minute rescue take place.

In the course of his quest, Enzo tours the Paris catacombs, jumps from a bridge onto a barge, outlays two hundred euros on a bottle of champagne he doesn’t get to taste, finds ducklings in his bath, digs up a grave, spends several hours in a police cell, discovers two dead bodies, narrowly escapes a stabbing, is the target of road-rage, and is thoroughly annoyed by a certain metal-detector (and its owner), until he isn’t.

A master of descriptive prose, May easily captures his setting, both in Paris and in provincial France. The plot has enough distractions and red herrings to keep the pages turning and the reader guessing. From small details dropped into the narrative, Enzo is clearly a complex character whose history is bound to impact on further books in the series, of which there are currently six. Superb cold-case crime fiction.

The Night Gate: the Razor-Sharp Finale to the Enzo Macleod Investigations
Peter May
$18.39 $22.99
More Books By Peter May
View All

The Night Gate: the Razor-Sharp Finale to the Enzo Macleod Investigations
$26.39 $32.99