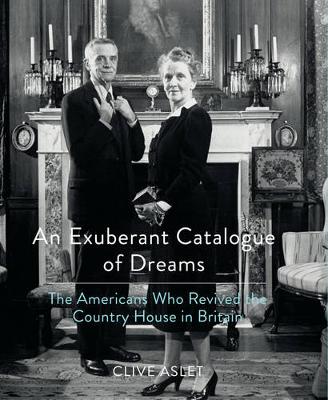 An Exuberant Catalogue of Dreams

The Americans Who Revived the Country House in Britain

Description - An Exuberant Catalogue of Dreams by Clive Aslet

To a modern visitor nothing will seem more British than a classic country house like Cliveden or Leeds Castle. But the truth is actually very different. That such fabulous places exist in their present form - or in the case of, say, Blenheim, survive in the ownership of the family - is as much as anything down to American money and taste. Now, for the first time, Clive Aslet's magnificent book reveals the extent of this remarkable phenomenon.

Covering eighteen Americans and their houses - from the captivating May Goelet and Floors Castle in Scotland to the big game hunter Willie James and West Dean Park on the south coast - he illustrates the varied destinies by which stupendously wealthy Americans ended up owning great stately piles, and the variety of transformations they wrought upon them.

Some of the marriages between aristocrats and heiresses were happy, others distinctly less so. Dowries went on new roofs to keep the rain out and electric lighting and central heating to modernise dwellings that could be as wintry as the hearts of their ancestral owners. For self-made magnates like William Randolph Hearst or Gordon Selfridge a country house was a rich man's folly - Hearst filled St Donat's castle in Wales with untold fittings and trophies but hardly ever visited it, Selfridge's pharaonic vision for Hengistbury Head never escaped the drawing board. For others, like Andrew Carnegie at Skibo or Sir Paul Getty at Wormsley, it was the chance to out-do the natives by creating idylls of baronial splendour or arcadian cricket fields.

But the American influence, as Clive Aslet shows, was lasting, and profound beyond architecture and design. What became known as the 'country house look' was codified by an American - Nancy Lancaster. The greatest of early twentieth-century gardens, Hidcote, was created by an American, Lawrence Johnston. It was an American romance - with Wallis Simpson at Fort Belvedere - that caused Edward VIII to abdicate. Illustrated throughout with magnificent photographs, An Exuberant Catalogue of Dreams is a fascinating chronicle of how it happened that, as Gladstone's Chancellor of the Exchequer remarked in 1898, 'We are all Americans now'.


Book Reviews - An Exuberant Catalogue of Dreams by Clive Aslet

» Have you read this book? We'd like to know what you think about it - write a review about Exuberant Catalogue of Dreams book by Clive Aslet and you'll earn 50c in Boomerang Bucks loyalty dollars (you must be a Boomerang Books Account Holder - it's free to sign up and there are great benefits!)

Clive Aslet is an award-winning writer and journalist, and an acknowledged authority on British architecture. He joined Country Life in 1977, was for thirteen years its Editor, and is now Editor-at-Large. He is the author of many books, including The English House, Landmarks of Britain and Villages of Britain.

Villages of Britain: The Five Hundred Villages That Made the Countryside
$71.07 $78.97