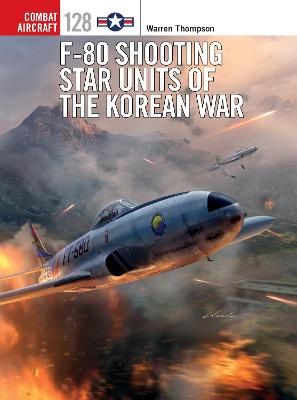 Built within a 180-day time limit in 1943, the F-80 Shooting Star first saw service in Italy in the final year of World War 2, and consequently was sent to bases in the US, Europe and the Far East after VJ Day. It was the latter groups based in Japan that initially bore the brunt of the early fighting in Korea, engaging MiG-15s in the world's first jet-versus-jet combat.

Flown principally by the 8th and 49th Fighter Bomber Wings, the F-80 served until the end of the war, completing an astonishing 98,515 combat sorties, shooting down 17 aircraft (including three of the vastly superior MiG-15s), dropping over 33,000 tons of bombs, and firing over 80,000 air-to-ground rockets. Aside from the fighter-bomber Shooting Stars, the ultra-rare, but heavily used, photo-reconnaissance RF-80A saw extensive use in the frontline in Korea as a replacement for the vulnerable RF-51D.

Filled with first-hand accounts and rare colour photographs taken by the veterans themselves, this is the engrossing story of the pioneering F-80 Shooting Star.

» Have you read this book? We'd like to know what you think about it - write a review about F-80 Shooting Star Units of the Korean War book by Warren Thompson and you'll earn 50c in Boomerang Bucks loyalty dollars (you must be a Boomerang Books Account Holder - it's free to sign up and there are great benefits!)


A Preview for this title is currently not available.
More Books By Warren Thompson
View All

The Law of the Farm: A Treatise on the Leading Titles of the Law Involved in Farming Business and Li
$80.72 $89.69