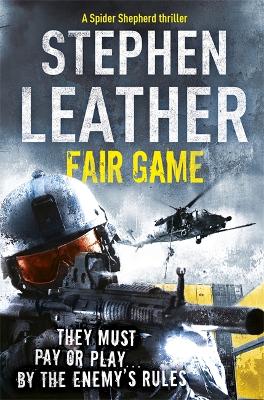 The eighth book in the bestselling Dan 'Spider' Shepherd series. Kidnapping is one of the cruellest crimes - lives are put at risk for cold, hard cash. But when Somali pirates seize the crew of a yacht off the coast of Africa, they bite off more than they can chew.One of the hostages has friends in high places and Spider Shepherd is put on the case. He goes deep undercover in an audacious plan to bring an end to the pirate gang's reign of terror.But as Shepherd closes in on his quarry he realises that there's much more at stake than the lives of the hostages and that the pirates are involved in a terrorist plot that will strike at the heart of London.

» Have you read this book? We'd like to know what you think about it - write a review about Fair Game book by Stephen Leather and you'll earn 50c in Boomerang Bucks loyalty dollars (you must be a Boomerang Books Account Holder - it's free to sign up and there are great benefits!)

Stephen Leather is one of the UK's most successful thriller writers, an ebook and Sunday Times bestseller and author of the critically acclaimed Dan 'Spider' Shepherd series and the Jack Nightingale supernatural detective novels. Before becoming a novelist he was a journalist for more than ten years on newspapers such as The Times, the Daily Mirror, the Glasgow Herald, the Daily Mail and the South China Morning Post in Hong Kong. He is one of the country's most successful ebook authors and his titles have topped the Amazon Kindle charts in the UK and the US. His bestsellers have been translated into fifteen languages and he has also written for television. You can learn more from Stephen's website, www.stephenleather.com, find him on Facebook, and follow him on Twitter at twitter.com/stephenleather. Stephen also has a website for his Spider Shepherd series, www.danspidershepherd.com, and for his Jack Nightingale series, www.jacknightingale.com.