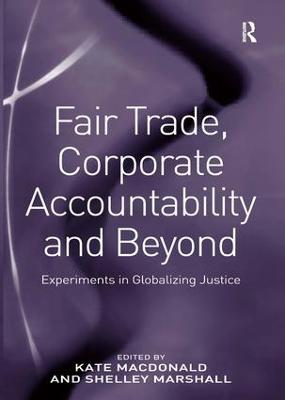 Fair Trade, Corporate Accountability and Beyond

Description - Fair Trade, Corporate Accountability and Beyond by Shelley Marshall

As trade and production have increasingly crossed international boundaries, private bodies and governments alike have sought new ways to regulate labour standards and advance goals of fairness and social justice. Governments are harnessing social and market forces to advance corporate accountability, while private bodies are employing techniques drawn from command and control regulation to shape the behaviour of business. This collection brings together the research and reflections of a diverse international mix of academics, activists and practitioners in the fields of fair trade and corporate accountability, representing perspectives from both the industrialized and developing worlds. Contributors provide detailed case studies of a range of social justice governance initiatives, documenting the evolution of established strategies of advocacy and social mobilization, and evaluating the strengths and limitations of voluntary initiatives compared with legally enforceable instruments.

» Have you read this book? We'd like to know what you think about it - write a review about Fair Trade, Corporate Accountability and Beyond book by Shelley Marshall and you'll earn 50c in Boomerang Bucks loyalty dollars (you must be a Boomerang Books Account Holder - it's free to sign up and there are great benefits!)

A Preview for this title is currently not available.
More Books By Shelley Marshall
View All