At the Wings & Co. Fairy Detective Agency, Emily Vole and her friends are beginning to worry. It's five months since their official opening and they still haven't had one case. Then local landowner Sir Walter Cross dies suddenly and mysteriously. The detectives suspect fairy meddling. And when Mr Rollo the tailor mysteriously loses everything and Pan Smith's wedding plans are ruined the night before her big day, they're convinced there must be magic at play. Now they have not one, but three pickled herrings to deal with! Can they solve the mystery of who is stealing people's luck before the meddling fairy goes too far 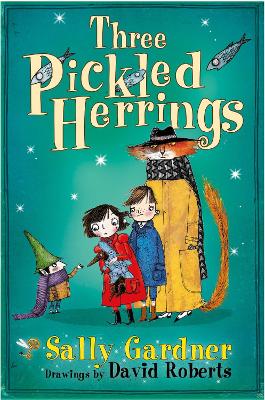 » Have you read this book? We'd like to know what you think about it - write a review about Fairy Detective Agency: Three Pickled Herrings book by Sally Gardner and you'll earn 50c in Boomerang Bucks loyalty dollars (you must be a Boomerang Books Account Holder - it's free to sign up and there are great benefits!)

Sally Gardner is an award-winning novelist from London. Her books have been translated into 22 languages and have sold more than 1 million copies in the UK. Sally continues to be an avid spokesperson for dyslexia awareness, working to change the way it is perceived by society. She was recently awarded the CARNEGIE MEDAL and the COSTA BOOK AWARD.Visit her website at http://www.sallygardner.net, and follow her on Twitter at https://twitter.com/TheSallyGardner and Facebook at https://www.facebook.com/SallyGardner.AuthorDavid Roberts is a hugely successful illustrator who has illustrated books by Philip Ardagh, Julia Donaldson, Jacqueline Wilson and Chris Priestley. He's also the creator of Dirty Bertie. David lives in London.