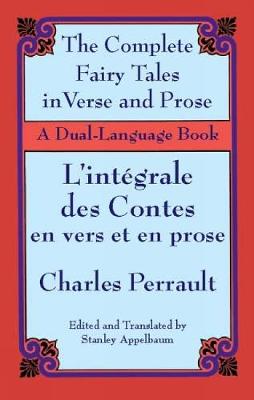 Based on the folkloric tales told by the widowed author to his motherless brood, this collection of traditional stories first appeared under Charles Perrault's name in the 18th century. In the fine tradition of Aesop, the fables enlighten as well as entertain, imparting practical moral advice. This dual-language edition features accurate new English translations on the pages facing the original French, in addition to an informative introduction and annotations. It opens with a trio of tales in verse: ""Griselidis,"" the legend of a patient wife, derived from Boccaccio's Decameron; ""Peau d'Ane"" (""Donkey-Skin""), the story of a beauty in disguise; and a familiar farce known as ""Les souhaits ridicules"" (""The Ludicrous Wishes""). Well-known and much-loved prose tales follow: ""Sleeping Beauty,"" ""Little Red Riding Hood,"" ""Puss in Boots,"" ""Cinderella,"" and others. This is the most complete edition available in English, comprising the verse tales as well as those in prose, plus all the original prefaces, letters, introductions, morals, and more. Any student of French language or literature will welcome this comprehensive edition.

» Have you read this book? We'd like to know what you think about it - write a review about Fairy Tales in Verse and Prose/Les contes en vers et en prose book by Charles Perrault and you'll earn 50c in Boomerang Bucks loyalty dollars (you must be a Boomerang Books Account Holder - it's free to sign up and there are great benefits!)

Stanley Appelbaum served for decades as Dover's Editor in Chief until his retirement in 1996. He continues to work as a selector, compiler, editor, and translator of literature in a remarkable range of languages that includes Spanish, Italian, French, German, and Russian.