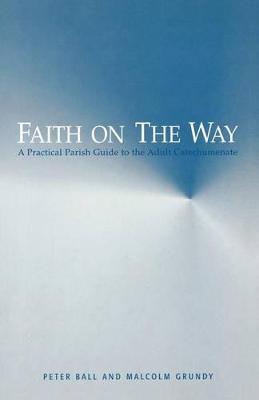 Faith on the Way

A Practical Parish Guide to the Adult Catechumenate

Description - Faith on the Way by Peter Ball

Bringing together the authors's experience of working in Europe, the United States, and Australia, this book includes the latest rites for welcoming adults into church membership, together with a detailed account of the Adult Catechumenate and the way in which adults may make a journey into faith, making commitment at the right time on the way and following through into discipleship.

Book Reviews - Faith on the Way by Peter Ball

» Have you read this book? We'd like to know what you think about it - write a review about Faith on the Way book by Peter Ball and you'll earn 50c in Boomerang Bucks loyalty dollars (you must be a Boomerang Books Account Holder - it's free to sign up and there are great benefits!)

Peter Ball, a former canon of St Paul's Cathedral, has many years experience in parish ministry and spiritual direction. He is author of Adult Believing and Adult Way to Faith. Canon Malcolm Grundy was Director of the Foundation for Church Leadership (until March 2009, when he became a Consultant with Live-Wires Associates). He has been variously Team Rector of Huntingdon, Archdeacon of Craven (Bradford), Director of Training (London) and Senior Industrial Missioner (Sheffield). He is a Consultant and trainer with Avec (Director), Edward King Institute for Ministry Development (Founder Editor of the journal Ministry), Chair of MODEM (Managerial and Organizational Disciplines for the Enhancement of Ministry) and Non Executive Director of GJ Palmer (Publishers of the Church Times). He is the author of Light in the City: Stories of the Church Urband Fund (Canterbury Press, 1990); An Unholy Conspiracy: the Separation of Church and Industry since the Reformation (Canterbury Press, 1992); Evangelisation through the Adult Catechumenate (Grove, 1991; also translated into Swedish as Om Vuxansvag In I Forsamlingen; Verbum, 1992); Community Work: A Handbook for Volunteer Groups and Local Churches (Cassell/Mowbray/Continuum, 1995); The Parchmore Partnership (ed.), Chester House Publications, 1995; Understanding Congregations: A new shape for the local church (Cassell/Mowbray/Continuum, 1998); Management and Ministry (1997) and Managing, Leading, Ministering (March 1999), contributor and editorial adviser (both Canterbury Press); Faith on the Way (Grundy and Ball; Cassell/Mowbray/Continuum, 2000); What they don't teach you at theological college (Canterbury Press, 2003); contributor to Creative Church Leadership (MODEM/Canterbury Press, 2004); What's New in Church Leadership? (Canterbury Press, 2007); contributor to Breaking the Mould of Christendom, a symposium (Epworth Press, 2008); Transforming Conflict (ed.), (FCL, 2008)

A Preview for this title is currently not available.
More Books By Peter Ball
View All