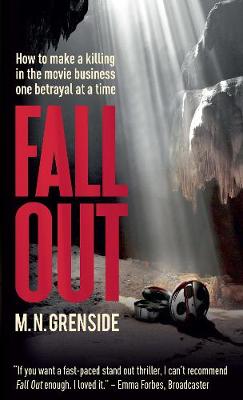 Description - Fall Out by Mark Grenside

In this stunning debut thriller from writer Mark Grenside, follow the story of Producer Marcus Riley, who sets out on an increasingly dangerous quest to get the film FALL OUT made. Some will stop at nothing to ensure the movie is never completed.

An LA screenwriter is killed shortly after completing his latest script, FALL OUT - a thriller destined to be a blockbuster but written with a secret double purpose. Echoing events from the past the screenplay is sent to a very specific group of people and will change their lives forever. All are connected to a movie that had abruptly stopped shooting in the jungles of the Philippines years before. FALL OUT exposes the truth about a conspiracy and murder that led to a half-a-billion-dollar fortune for a select few. Follow the story of Producer Marcus Riley, who sets out on an increasingly dangerous quest to get FALL OUT made. From a powerful Agent' s office in Hollywood, hidden treasures in Belgravia and a remote chalet in the Swiss Alps to murder at the Cannes Film Festival, Marcus teams up with designer Melinda (Mako) de Turris as they and the other recipients of the screenplay are pursued by an assassin from the past. With clues cleverly concealed in the screenplay, Marcus and Mako unravel a lethal puzzle that for some will bring death, others the truth and ends in a cave with a shocking secret.....

» Have you read this book? We'd like to know what you think about it - write a review about Fall Out book by Mark Grenside and you'll earn 50c in Boomerang Bucks loyalty dollars (you must be a Boomerang Books Account Holder - it's free to sign up and there are great benefits!)