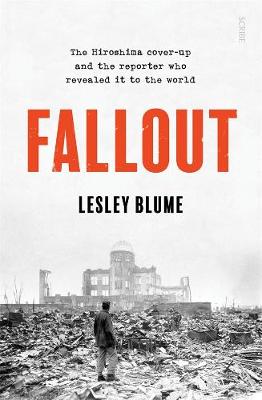 Fallout: the Hiroshima cover-up and the reporter who revealed it to the world

Description - Fallout: the Hiroshima cover-up and the reporter who revealed it to the world by Lesley Blume

New York Times bestselling author Lesley Blume reveals how a courageous reporter uncovered one of the greatest and deadliest cover-ups of the 20th century - the true effects of the atom bomb - potentially saving millions of lives.

In the days following the atomic bombings of Hiroshima and Nagasaki, the Japanese surrendered unconditionally. But even before the surrender, the US had begun a secret propaganda campaign to celebrate these weapons as the ultimate peacekeepers - hiding the true extent and nature of their devastation. The cover-up intensified as Americans closed the atomic cities to Allied reporters, preventing information from leaking about the horrific and lasting effects of radiation that would kill thousands of people during the months after the blast. For nearly a year, the cover-up worked - until New Yorker journalist John Hersey got into Hiroshima and reported the truth to the world.

As Hersey and his editors prepared his article for publication, they kept the whistleblowing story secret - even from most of their New Yorker colleagues. When the magazine published 'Hiroshima' in August 1946, it became an instant global sensation, and inspired pervasive horror about the weapons that had been covertly waged in America's name. Since 1945, no nuclear weapons have ever been deployed in war, partly because Hersey alerted the world to their true, devastating impact. This knowledge has remained among the greatest deterrents to using them since the end of World War II.

Released on the 75th anniversary of the Hiroshima bombing, Fallout is an engrossing detective story, as well as an important piece of hidden history, which shows how one heroic scoop saved - and can still save - the world.

'In documenting how John Hersey pulled off one of the greatest journalistic feats in history, Blume has herself pulled off a great feat. Fallout is a fast-paced, deeply reported revelation.'
-Gay Talese, award-winning journalist, and author of High Notes and The Voyeur's Motel

'At a time when our world-destroying arsenal of nuclear weapons seems to have been all but forgotten, Lesley Blume's eloquent rediscovery of the story behind John Hersey's startling 1946 narrative 'Hiroshima' reminds us again of the vast human disaster even a small, primitive atomic bomb can visit upon the world.'
-Richard Rhodes, Pulitzer Prize-winning author of The Making of the Atomic Bomb

'Blume is a tireless researcher and beautiful writer, who moves through her narrative with seeming effortlessness - a trick that belies the skill and hard labour required to produce such prose ... Fallout is a warning without being a polemic ... a book of serious intent that is nonetheless pleasant to read. There are knowable reasons for this, including Blume's flawless paragraphs; her clear narrative structure; her compelling stories, subplots and insights.'
-William Langewiesche, The New York Times

Buy Fallout: the Hiroshima cover-up and the reporter who revealed it to the world by Lesley Blume from Australia's Online Independent Bookstore, Boomerang Books.

Book Reviews - Fallout: the Hiroshima cover-up and the reporter who revealed it to the world by Lesley Blume

» Have you read this book? We'd like to know what you think about it - write a review about Fallout: the Hiroshima cover-up and the reporter who revealed it to the world book by Lesley Blume and you'll earn 50c in Boomerang Bucks loyalty dollars (you must be a Boomerang Books Account Holder - it's free to sign up and there are great benefits!)

Cornelia And The Audacious Escapade
No Stock on Hand, Supplier Has No Due Date for Supply.
$12.59 $13.99