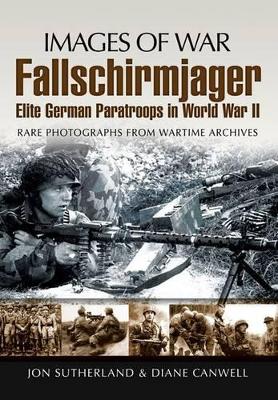 The photos in this book are taken from an unpublished album that belonged to a member of the elite German Paratroopers. First Sgt Wilhelm Plieschen served with Fallschirmjager Machine Gun Battalion 7. They suffered very heavy losses in the invasion of Crete and then saw bloody conflict as "Hitler' s Fire-fighters" on the Russian Front and put up fierce resistance in places such as Monte Casino. The photographs were taken in Austria, Romania, Bulgaria Greece and Russia. There are photographs taken on an airfield on 15 May 1941 of paratroopers with kit on the ground and in front of their transport aircraft. There are a number of photographs taken en route to Crete with photographs of the paratroopers in a JU52 and shots looking out from the plane.On 20 May 1941, Plieschen was dropped over Crete. There are a set of photographs taken by the paratrooper moments after he had landed on the island. Some show other paratroopers drifting down and others feature formations of German aircraft amidst flak.There are very good images showing Germans on the deck of the badly damaged and abandoned HMS York in Souda Bay. There are photographs showing Major Erich Schulz decorating paratroopers on Crete. Further on in the set are photos showing the then Commander of the Fallschirmjager, General Kurt Student inspecting the troops. Later our man is sent to Russia. There are outstanding rare photos of paratroopers in heavy winter camouflage clothing. They experience heavy fighting. AUTHOR: Jon Sutherland has written extensively on military history and warfare. Much of his previous work has concerned the American involvement in the European in World War I and the European theatre of World Wars I & II. Diane Canwell has written works on European history and is much involved in the research for this book. SELLING POINTS: Outstanding air to air and ground shots Captures rare moments of German airborne troops in airborne transit, in battle and relaxing Unique unpublished wartime photographs ILLUSTRATIONS 120 b/w photographs *

» Have you read this book? We'd like to know what you think about it - write a review about "Fallschirmjager": Elite German Paratroops in World War II book by Jon Sutherland and you'll earn 50c in Boomerang Bucks loyalty dollars (you must be a Boomerang Books Account Holder - it's free to sign up and there are great benefits!)


A Preview for this title is currently not available.
More Books By Jon Sutherland
View All