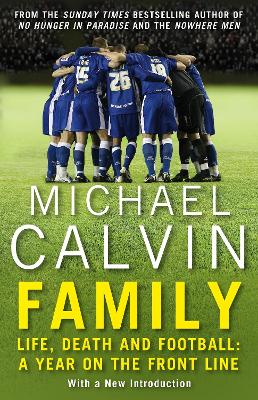 Life, Death and Football: A Year on the Frontline with a Proper Club

From the award-winning author of NO HUNGER IN PARADISE

Outside the global spotlight, footballers don't drive Aston Martins or pose for underwear ads. This is war. This is life. This is football.

Michael Calvin turned up for the first day of pre-season training at Millwall FC. 333 days later, he sat among the subs at Wembley.

Over the course of a season, he witnessed the intimate everyday life of a football club far from the glitz and glamour of the Premier League, and the unique characters that come together every day on the field.

These are dedicated, hard-working family men, close to their roots, 'playing for the people who hate their jobs, who'd love our lives.'

Forget about the over-hyped circus of the Premier League. This is the beautiful game in all its raucous glory- essential reading for anyone whom football is a way of life.

» Have you read this book? We'd like to know what you think about it - write a review about Family book by Michael Calvin and you'll earn 50c in Boomerang Bucks loyalty dollars (you must be a Boomerang Books Account Holder - it's free to sign up and there are great benefits!)

Michael Calvin, one of the UK's most accomplished sportswriters, has worked in more than eighty countries, covering every major sporting event, including seven summer Olympic Games and six World Cup finals. He was named Sports Writer of the Year for his despatches as a crew member in a round-the-world yacht race and has twice been named Sports Reporter of the Year. He is a bestselling author, whose book The Nowhere Men won the Times Sports Book of the Year prize in 2014. He became the first author to receive the award in successive years, when Proud, his collaboration with former Wales and British Lions rugby captain Gareth Thomas, was named Sports Book of the Year in 2015. In the same year the second book of his football trilogy, Living On The Volcano, was shortlisted for the William Hill Sports Book of the Year prize. No Nonsense, his collaboration with Joey Barton, was nominated for the award in 2016.

A Preview for this title is currently not available.
More Books By Michael Calvin
View All