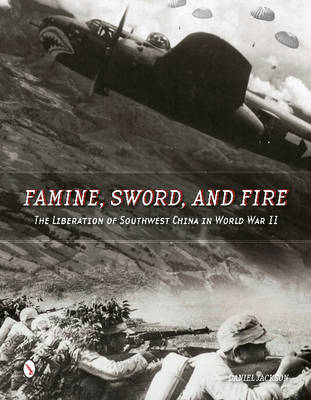 The Liberation of Southwest China in World War II

The untold story of Chinese and Americans standing side-by-side, fighting together and dying together on the highest, most rugged battlegrounds of WWII. In May 1942, the Japanese 15th Army conquered Burma and southwest China. Only a desperate defence by disorganised and defeated Chinese troops and the war-weary remains of Claire Chennault's mercenary Flying Tigers stopped the advance at the Salween River. For two years, the people of southwest China lived under an oppressive Japanese occupation while Generalissimo Chiang Kai-shek, President Franklin Roosevelt, General Joseph Stilwell, and Major General Claire Chennault bickered over what to do next. Finally, in May 1944, the Chinese Expeditionary Force, with American supplies and advisors, supported from above by the legendary 14th Air Force, crossed the Salween to take back what they had lost. AUTHOR: Daniel Jackson graduated from the Air Force Academy in 2009 with a bachelor's degree in military history and a minor in Chinese language. 112 b/w photographs and maps

» Have you read this book? We'd like to know what you think about it - write a review about Famine, Sword, and Fire book by Daniel Jackson and you'll earn 50c in Boomerang Bucks loyalty dollars (you must be a Boomerang Books Account Holder - it's free to sign up and there are great benefits!)

Daniel Jackson graduated from the Air Force Academy in 2009 with a bachelors degree in military history and a minor in Chinese language. He is now an Air Force pilot living with his beautiful wife near Pensacola, Florida.

A Preview for this title is currently not available.
More Books By Daniel Jackson
View All