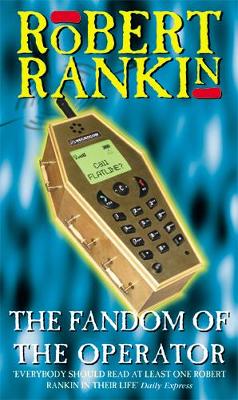 The Fandom Of The Operator

Description - The Fandom Of The Operator by Robert Rankin

'To call Rankin irreverent doesn't begin to describe just how good he is at playing with the rules' MIRRORGary Cheese is twenty-two years of age and works for British Telecom as an operator. Gary's hobbies include watching TV, walking his dog Princey, going down the pub with his mates, and attempting to re-animate the dead. He hasn't been having too much success with the latter so far. But Gary's heard a rumour. According to this bloke he met down the pub, there exists certain telecommunications technology that can actually let you speak to the dead. Apparently it's been in operation for years. FLATLINE, it's called, a chatline to the dead. They ran all these ads on the TV a few years ago to prepare the public for it. Those ones about having a one-to-one with famous dead people. But it seems something went very wrong- the dead had certain things to say to the living that the powers that be couldn't allow to be heard. Or something. Apparently. Gary's determined to find out the truth. Gary's a bit of a fan boy and Gary really wants to speak to all of his dead heroes. And Gary will have the time of his life when he talks to the dead.

Buy The Fandom Of The Operator by Robert Rankin from Australia's Online Independent Bookstore, Boomerang Books.

Book Reviews - The Fandom Of The Operator by Robert Rankin

» Have you read this book? We'd like to know what you think about it - write a review about Fandom Of The Operator book by Robert Rankin and you'll earn 50c in Boomerang Bucks loyalty dollars (you must be a Boomerang Books Account Holder - it's free to sign up and there are great benefits!)

Robert Rankin is the author of Web Site Story, Waiting for Godalming, Sex and Drugs and Sausage Rolls, Snuff Fiction, Apocalypso, The Dance of the Voodoo Handbag, Sprout Mask Replica, Nostradamus Ate My Hamster, A Dog Called Demolition, The Garden of Unearthly Delights, The Most Amazing Man Who Ever Lived, The Greatest Show Off Earth, Raiders of the Lost Car Park, The Book of Ultimate Truths, the Armageddon quartet (three books), and the Brentford trilogy (five books) which are all published by Corgi Books. Robert Rankin's latest novel, The Fandom of the Operator, is now available as a Doubleday hardback. For more information on Robert Rankin and his books, see his website at www.lostcarpark.com/sproutlore

A Preview for this title is currently not available.
More Books By Robert Rankin
View All