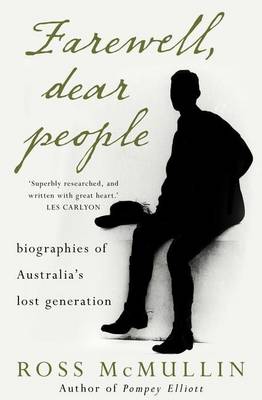 For Australia, a new nation with a relatively small population, the death of 60,000 soldiers during World War I was catastrophic. It is hardly surprising, then, that Australians evaluating the consequences of the conflict have tended to focus primarily on the numbing numbers of losses - on the sheer quantity of all those countrymen who did not return. That there must have been extraordinary individuals among them has been implicitly understood, but these special Australians are unknown today. This book seeks to retrieve their stories and to fill the gaps in our collective memory. Farewell, Dear People contains ten extended biographies of young men who exemplified Australia's gifted lost generation of World War I. Among them are accounts of an internationally acclaimed medical researcher; a military officer described by his brigadier as potentially an Australian Kitchener; a rugby international who became an esteemed administrator and a rising Labor star; an engineer who excelled on Mawson's Antarctic mission; a visionary vigneron and community leader who was renowned for successful winemaking at an unusually young age' a Western Australian Rhodes scholar assured of a shining future in the law and/or politics; a Tasmanian footballer who dazzled at the highest level; and a budding architect from Melbourne's best-known creative dynasty who combined an endearing personality with his family's flair for writing and drawing. This magisterial book tells their stories for the first time. In doing so, it enriches the story of Australia immeasurably. 'Farewell, Dear People is a powerful revelation of the lasting cost of the Great War - a deeply felt engagement with lost lives, and a superb union of research and writing.' Peter Stanley, author of Men of Mont St Quentin

» Have you read this book? We'd like to know what you think about it - write a review about Farewell, Dear People: Biographies Of Australia's Lost Generation book by Ross McMullin and you'll earn 50c in Boomerang Bucks loyalty dollars (you must be a Boomerang Books Account Holder - it's free to sign up and there are great benefits!)

Ross McMullin is a historian and biographer whose main interests are Australian history, politics and sport. He has researched and written extensively about the impact on Australia of its involvement in World War I. His books include the ALP centenary history The Light on the Hill- The Australian Labor Party 1891 - 1991, the award-winning biography Pompey Elliott, and So Monstrous a Travesty- Chris Watson and the World's First National Labour Government. He has also contributed chapters to many other books.

A Preview for this title is currently not available.
More Books By Ross McMullin
View All