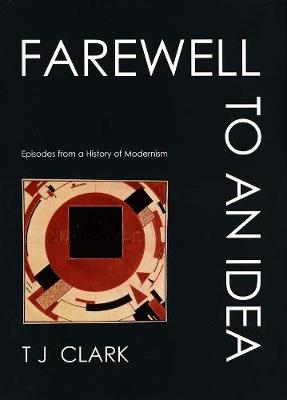 Farewell to an Idea

Episodes from a History of Modernism

Description - Farewell to an Idea by T. J. Clark

In this intense, far-reaching, and poignant book-a book that sums up the work of a lifetime-the acclaimed art historian T. J. Clark rewrites the history of modern art. With the fall of the Berlin Wall, he explains, the project called socialism may have come to an end at roughly the same moment as modernism. Did modernism and socialism depend on each other for their vitality-for their sense of the future and their wish to live in a fully material world? Have they died? Aware of modernism's foibles and blind spots, but passionately attached to the movement's wildness, Clark poses these fundamental questions in Farewell to an Idea.

Modernism, Clark argues, was an extreme answer to an extreme condition-the one Max Weber summed up as "the disenchantment of the world." Clark focuses on instances of maximum stress, when the movement revealed its true nature. The book begins with Jacques-Louis David, painting at the height of the Terror in 1793, then leaps forward to Pissarro a hundred years later, struggling to picture Two Young Peasant Women ina way that agreed with his anarchist politics. Next the author turns in succession to Cezanne's paintings of the Grandes Baigneuses and their coincidence in time (and maybe intention) with Freud's launching of psychoanalysis; to Picasso's Cubism; and to avant-garde art after the Russian Revolution. Clark concludes with a reading of Jackson Pollock's tragic version of abstraction and suggests a new set of terms to describe avant-garde art-perhaps in its final flowering-in America after 1945. Shifting between broad, speculative history and intense analysis of specific works, Clark not only transfigures our usual understanding of modern art, he also launches a new set of proposals about modernity itself.]]>

Book Reviews - Farewell to an Idea by T. J. Clark

» Have you read this book? We'd like to know what you think about it - write a review about Farewell to an Idea book by T. J. Clark and you'll earn 50c in Boomerang Bucks loyalty dollars (you must be a Boomerang Books Account Holder - it's free to sign up and there are great benefits!)

T.J. Clark is George C. and Helen N. Pardee Professor of Art History at the University of California, Berkeley.

A Preview for this title is currently not available.
More Books By T. J. Clark
View All