The word 'fascism' sometimes appears to have become a catch-all term of abuse, applicable to anyone on the political right, from Hitler to Donald Trump and from Putin to Thatcher. While some argue that it lacks any distinctive conceptual meaning at all, others have supplied highly elaborate definitions of its 'essential' features. It is therefore a concept that presents unique challenges for any student of political theory or history.

In this accessible book, Roger Griffin, one of the world's leading authorities on fascism, brings welcome clarity to this controversial ideology. He examines its origins and development as a political concept, from its historical beginnings in 1920s Italy up to the present day, and guides students through the confusing maze of debates surrounding the nature, definition and meaning of fascism. Elucidating with skill and precision its dynamic as a utopian ideology of national/racial rebirth, Griffin goes on to examine its post-Second World War mutations and its relevance to understanding contemporary right-wing political phenomena, ranging from Marine Le Pen to Golden Dawn.

This concise and engaging volume will be of great interest to all students of political theory, the history of political thought, and modern history.

Other Editions - Fascism by Roger Griffin 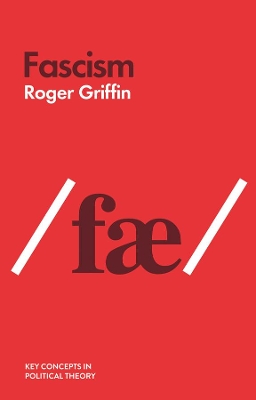 » Have you read this book? We'd like to know what you think about it - write a review about Fascism book by Roger Griffin and you'll earn 50c in Boomerang Bucks loyalty dollars (you must be a Boomerang Books Account Holder - it's free to sign up and there are great benefits!)

A Preview for this title is currently not available.
More Books By Roger Griffin
View All

Fascism, Totalitarianism and Political Religion
No Stock on Hand, Supplier Has No Due Date for Supply.
$226.80 $252.00

Fascism Past and Present, West and East - An International Debate on Concepts and Cases in the Comparative Study of the Extreme Right
No Stock on Hand, Supplier Has No Due Date for Supply.
$68.36 $75.95

Principles of Hazardous Materials Management, Second Edition
No Stock on Hand, Supplier Has No Due Date for Supply.
$226.80 $252.00