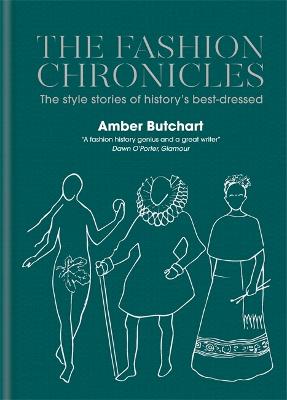 From BBC television and radio presenter Amber Butchart, The Fashion Chronicles is an exploration of the 100 most fascinating style stories ever told.From Eve's fig leaf to Hilary Clinton's pantsuit, the way we choose to clothe our bodies can carry layer upon layer of meaning. Across cultures and throughout history people have used clothing to signify power and status, to adorn and beautify, even to prop up or dismantle regimes.Here, explore the best-dressed figures in history, from Cleopatra to Beyonce, Joan of Arc to Ru Paul. Some have influenced the fashion of today, while some have used their clothing to change the world. But all have a sartorial story to tell.

» Have you read this book? We'd like to know what you think about it - write a review about Fashion Chronicles book by Amber Butchart and you'll earn 50c in Boomerang Bucks loyalty dollars (you must be a Boomerang Books Account Holder - it's free to sign up and there are great benefits!)

Amber Butchart is a fashion historian and BBC television and radio presenter. She is an associate lecturer at London College of Fashion, a former research fellow at the University of the Arts London, and hosts a series of regular talks at the V&A Museum, covering topics as diverse as Shakespeare and David Bowie. Amber's work has led to her being featured on numerous television and radio programmes on the BBC, Sky Arts and Channel 4, as well as in a huge number of publications, including Vogue, Grazia, Glamour, the Guardian and The Times. She has spoken at events hosted by prestigious cultural organisations including the British Museum, Tate Britain, Royal Academy of Arts, the Design Museum and the British Film Institute. She is a regular on SHOWstudio fashion week panels. Amber was Head Buyer and Trend Analyst for cutting-edge international vintage clothing chain Beyond Retro, and has worked with top fashion brands such as Yves Saint Laurent Beaute, applying her historical knowledge to their public campaigns. She is the author of three previous books, The Fashion of Film, Nautical Chic and Amber Jane Butchart's Fashion Miscellany.

A Preview for this title is currently not available.
More Books By Amber Butchart
View All