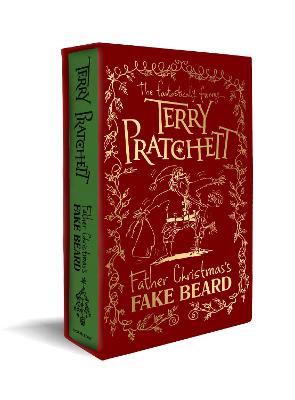 A collection of Christmas stories from the fantastically funny Terry Pratchett. With wonderful illustrations from Mark Beech, and a special, full-colour, collector's edition

Have you ever wanted Christmas to be different?

Turkey and carols, presents and crackers - they all start to feel a bit . . . samey.

How about a huge exploding mince pie, a pet abominable snowman, or a very helpful partridge in a pear tree? What if Father Christmas went to work at a zoo, or caused chaos in a toy store or, was even, arrested for burglary!?

Dive into the fantastically funny world of Terry Pratchett, for a festive treat like no other. These ten stories will have you laughing, gasping and crying (with laughter) - you'll never see Christmas in the same way again. » Have you read this book? We'd like to know what you think about it - write a review about Father Christmas's Fake Beard book by Terry Pratchett and you'll earn 50c in Boomerang Bucks loyalty dollars (you must be a Boomerang Books Account Holder - it's free to sign up and there are great benefits!)

Terry Pratchett (Author) Terry Pratchett was the acclaimed creator of the global bestselling Discworld series, the first of which, The Colour of Magic, was published in 1983. In all, he was the author of over fifty bestselling books. His novels have been widely adapted for stage and screen, and he was the winner of multiple prizes, including the Carnegie Medal, as well as being awarded a knighthood for services to literature. He died in March 2015. terrypratchett.co.uk Mark Beech (Illustrator) Mark Beech has been a freelance illustrator for the last ten years, and nowadays works a great deal in the world of children's publishing. From picture books for early readers, to education and fiction books for older readers, he has even made a picture book for the ipad, which allows him to animate illustrations. He also designs greeting cards, and has even been known to work in the world of advertising from time to time.