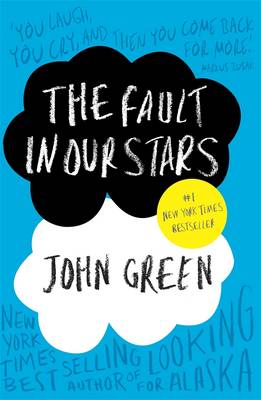 The Fault in Our Stars by John Green (author of Looking for Alaska and Paper Towns) is a teen romance with a twist, exploring the tragic business of being alive and in love. Insightful, bold, irreverent, and raw - The Fault in Our Stars is perfect for young adults and adults alike.
Despite the tumour-shrinking medical miracle that has bought her a few years, Hazel has never been anything but terminal, her final chapter inscribed upon diagnosis. But when a gorgeous plot twist named Augustus Waters suddenly appears at Cancer Kid Support Group, Hazel's story is about to be completely rewritten.

Insightful, bold, irreverent, and raw, The Fault in Our Stars is award-winning author John Green's most ambitious and heartbreaking work yet, brilliantly exploring the funny, thrilling, and tragic business of being alive and in love.

John Green is the best-selling author of Looking for Alaska; An Abundance of Katherines; Paper Towns; Will Grayson, Will Grayson.

'A novel of life and death and the people caught in between, The Fault in Our Stars is John Green at his best. You laugh, you cry, and then you come back for more.' Markus Zusak, bestselling and Printz Honor-winning author of The Book Thief

'The Fault in Our Stars takes a spin on universal themes-Will I be loved? Will I be remembered? Will I leave a mark on this world?-by dramatically raising the stakes for the characters who are asking.'
-Jodi Picoult, bestselling author of My Sister's Keeper and Sing You Home
'John Green writes incredible, honest truths about the secret, weird hearts of human beings. He makes me laugh and gasp at the beauty of a sentence or the twist of a tale. He is one of the best writers alive and I am seething with envy of his talent.' E. Lockhart, National Book Award Finalist and Printz Honor-winning author of The Disreputable History of Frankie Landau Banks and The Boyfriend List 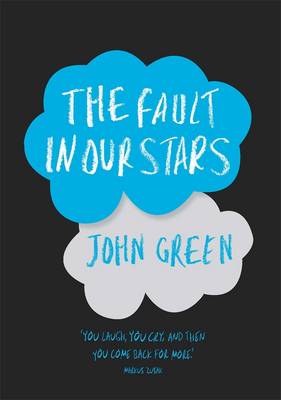 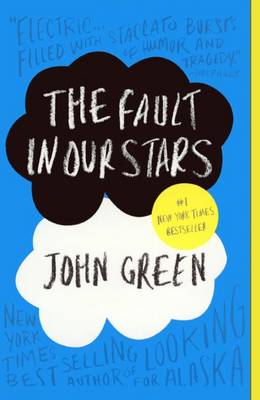 YouTube Videos - The Fault In Our Stars by John Green

Hazel (Shailene Woodley) and Gus (Ansel Elgort) are two extraordinary teenagers who share an acerbic wit, a disdain for the conventional, and a love that sweeps them -- and us -- on an unforgettable journey. Their relationship is all the more miraculous, given that they met and fell in love at a cancer support group. THE FAULT IN OUR STARS, based upon the number-one bestselling novel by John Green, explores the funny, thrilling and tragic business of being alive and in love.

The Fault in Our Stars is the fifth novel by American author, John Green. Hazel Grace Lancaster is a quirky sixteen-year-old with terminal lung cancer. In a Support Group she deems of doubtful value, she meets one-legged seventeen-year-old Augustus Waters, survivor of osteosarcoma. Gus and Hazel click almost immediately, sharing music and books, movies and jokes. Hazel’s need for closure about the characters of her favourite book leads them both down an unexpected path. The characters are appealing and most of the banter is funny, if occasionally having the saccharine sweetness of My Sister’s Keeper (the terrible movie, not the brilliant book), but ultimately, there is plenty of humour (some of it quite black), lots of wisdom and moments that will have tears welling in the eye of the most cynical reader. The plot has a twist that will hit hard. The best quote is by Peter van Houten (and as a cloggie I have a perfect right to laugh out loud at this one!): “Dutch is not so much a language as an ailment of the throat.” This book is a look into the truly unique world of the cancer patient, dipping into the cancer patient’s lexicon, touching on subjects as diverse as cancer perks, relationships with terminal patients and fear of being a grenade: a ticking time bomb that wounds everyone close to you when it explodes. Whether this is a realistic portrayal can only be judged by someone with a terminal diagnosis, but Green certainly presents an interesting perspective. Funny and moving.

John Green is an award-winning, New York Times-bestselling author whose many accolades include the Printz Medal, a Printz Honor, and the Edgar Award. He has twice been a finalist for the LA Times Book Prize. With his brother, Hank, John is one half of the Vlogbrothers (youtube.com/vlogbrothers), one of the most popular online video projects in the world. You can join the millions who follow John on Twitter (@realjohngreen) and tumblr (fishingboatproceeds.tumblr.com) or visit him online at johngreenbooks.com John lives with his family in Indianapolis, Indiana.

The Ballad of Songbirds and Snakes
Suzanne Collins
$25.49 $29.99
More Books By John Green
View All