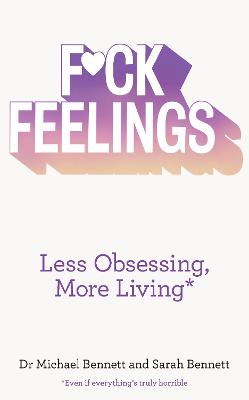 The solution is to find out what's bothering you and change it, right?

Fact is, there are some things you just can't change, and will become miserable trying.

Instead, Harvard-educated psychiatrist of 30 years Michael Bennett and his comedian daughter, Sarah, show you how to:

They may not promise lifelong happiness, but they do guarantee strength, pride, and a sense of humour.

» Have you read this book? We'd like to know what you think about it - write a review about F*ck Feelings book by Dr. Michael Bennett and you'll earn 50c in Boomerang Bucks loyalty dollars (you must be a Boomerang Books Account Holder - it's free to sign up and there are great benefits!)

The doctor in Dr. Lastname is Dr. Michael I. Bennett (Harvard University '66, Harvard Medical School '70), a board-certified psychiatrist. While he's worked in every aspect of his field, from hospital administration to managed care, his major interest is in his private practice which he's been running for almost 30 years. A distinguished fellow in the American Psychiatric Association, Dr. Bennett has also spent years as a member of the Massachusetts Psychiatric Society, serving as president in 2004-2005. He's the author of The Concise Guide to Managing Behavioral Health Care Within a Managed Care Environment, which, while informative, reads like a VCR manual. The writer half of Dr. Lastname is his daughter, Sarah Bennett. Just as Dr. Bennett has worked in every aspect of psychiatry, Sarah's written for magazines (Women's Wear Daily, Glamour UK), the internet (about.com, New York Magazine's Vulture blog, Black Balloon Publishing's Airship Daily blog, and, of course, fxckfeelings.com), television (MTV), and books (an essay in the 2007 anthology Damage Control, edited by the novelist Emma Forrest). She's spent two years writing sketch comedy at the Upright Citizens Brigade Theater in New York, and now writes for ucbcomedy.com. With Dr. Bennett's decades of experience as a therapist and his daughter's experience writing comedy and, well, being his daughter, they've successfully kept fxckfeelings.com going for over two years, collaborating on over 400 posts and 800 cases. Dr. Bennett has the expertise, but Ms. Bennett is the only one able to translate his sense of humour; he draws from his three decades of private practice, and she draws the humour out of his doctor-speak.