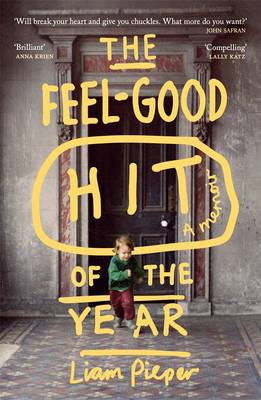 The Feel-Good Hit Of The Year: A Memoir

Description - The Feel-Good Hit Of The Year: A Memoir by Liam Pieper

Hilarious, compelling and sometimes heartbreaking, The Feel-Good Hit of the Year is a memoir about family, addiction and learning how to live with yourself, from a sharp and original new Australian voice.
'Will break your heart and give you chuckles. What more do you want?' John Safran

Liam Pieper was raised by his bohemian parents to believe in freedom and creativity, and that there's nothing wrong with smoking a little marijuana to make life more interesting.

A fast learner, Liam combined hippie self-actualisation with gen Y entrepreneurialism. By his early teens he had a fledgling drug habit, and a thriving business selling pot around the suburbs of Melbourne from the back of his pushbike. He picked up important life skills, like how to befriend a deranged jujitsu master, how to impress his girlfriend's mother by getting arrested in front of her, and how to negotiate pocket money based on how much he was charging his parents for an ounce.

But from these highs (chemical, financial and otherwise), Liam's life fell to dramatic lows. The muddled flower child became a petty criminal and an amoral coke monster. After a family tragedy and then his arrest on several counts of possession and trafficking, Liam had to consider- had it been a mistake to adopt the practices of a counterculture without any of its ethics?

Hilarious, compelling and sometimes heartbreaking, The Feel-Good Hit of the Year is a memoir about family, addiction and learning how to live with yourself, from a sharp and original new Australian voice.

'Terrific. I'm pressing it on all my friends.' David Marr

Buy The Feel-Good Hit Of The Year: A Memoir by Liam Pieper from Australia's Online Independent Bookstore, Boomerang Books.

Book Reviews - The Feel-Good Hit Of The Year: A Memoir by Liam Pieper

» Have you read this book? We'd like to know what you think about it - write a review about Feel-Good Hit Of The Year: A Memoir book by Liam Pieper and you'll earn 50c in Boomerang Bucks loyalty dollars (you must be a Boomerang Books Account Holder - it's free to sign up and there are great benefits!)

Liam Pieper is an author and journalist. His first book was a memoir, The Feel-Good Hit of the Year, shortlisted for the National Biography Award and the Ned Kelly Best True Crime award. His second was the Penguin Special Mistakes Were Made, a volume of humorous essays. He was co-recipient of the 2014 M Literary Award, winner of the 2015 Geoff Dean Short Story Prize and the inaugural creative resident of the UNESCO City of Literature of Prague. His first novel, The Toymaker, received the 2016 Christina Stead Fiction Award from the Fellowship of Australian Writers.

A Preview for this title is currently not available.
More Books By Liam Pieper
View All